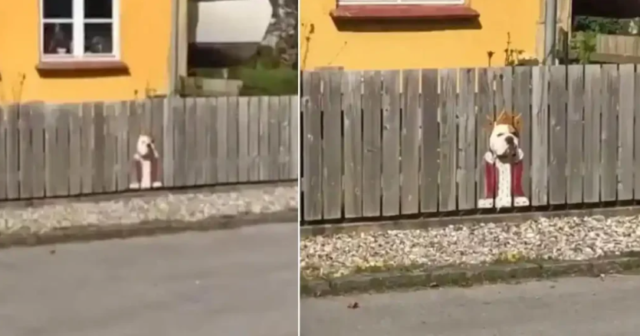 These days have left many people feeling restless, which is why many are trying to find different ways to entertain themselves. While some are spending their time doing various household chores, others are relying on the internet for some fun.

Now more than ever, people are sharing memes, funny videos, and anything uplifting on their social media page to keep their worries and loneliness amid this pandemic at bay.

And one of the most recent subjects of these hilarious viral posts is an adorable bulldog from Denmark.
Bulldog make people smile on social media pages.

“Omg! How funny and clever!”

Many people tagged their friends and family in the post and suggested they do the same for their own dogs. Some even shared pictures of their own version at home.
On social media pages, this bulldog is getting a lot of attention.

She knows that seeing them from the other side can bring laughs to onlookers, but she thought it would even be funnier if they painted something around the holes.

“You know, like in amusement parks where you can have your photo taken in these kind of holes,” she said about where she got the idea.

Ranveig came up with a crown and jester hat idea. Although she was the mastermind of this whole plan, it was her daughter who did the actual paintings.

When asked about her reaction to Bogart’s sudden online fame, she said that it’s been overwhelming.

“I, myself, am blown away that my little dog has gone viral—just because he looks goofy,” she said.

She also shared that strangers even reach out to her to say that they think her dogs and the paintings on the fence are hilarious.

Watch the video that was posted on a social media page to see Bogart’s viral video and prepare to get some giggles.

How adorable! Thanks for the laughs, Ranveig and Bogart!