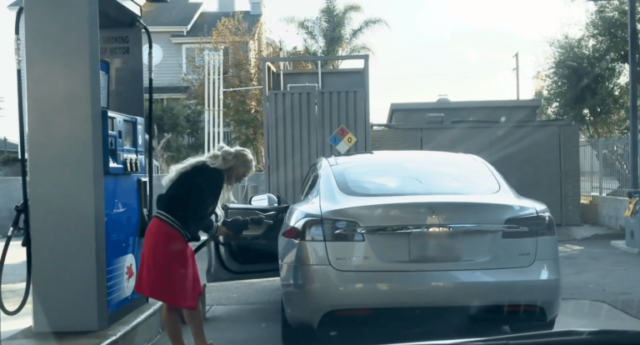 Internet users everywhere are getting a big laugh this week over a new video that shows a confused woman trying to put gas in her Tesla Model S.

Of course, we all know that electric cars do not need to be filled with gas, but this woman clearly did not get that memo. The video shows her desperately searching her car for where she could put the gas nozzle. She begins by looking around the entire outside of her car, but when she can’t find anywhere to put the nozzle, she starts searching both the inside of the vehicle and in the trunk.

Extremely confused, the woman pulls out her phone to look for answers as to where to put the gas nozzle as the two men filming the video crack up at her ordeal. When they finally clued her into the fact that she did not need to gas up an electric car, the woman found the situation just as funny as they did!

Trying to put gas in a Tesla pic.twitter.com/BYYQwssQr5

Internet users have gotten a kick out of the video, and it has quickly gone viral.

“Absolutely made my day. Best thing is that in the end she still looks as if she didn’t quite understood what the guy told her and what she had to do,” one social media user wrote, with another adding, “I’m glad she laughed it off and moved on. She either rented the car without knowing it was Tesla/didn’t know Tesla runs on electric or its her family’s car.”

Hopefully the woman will remember in the future that one of the perks of electric cars is not having to gas them up!