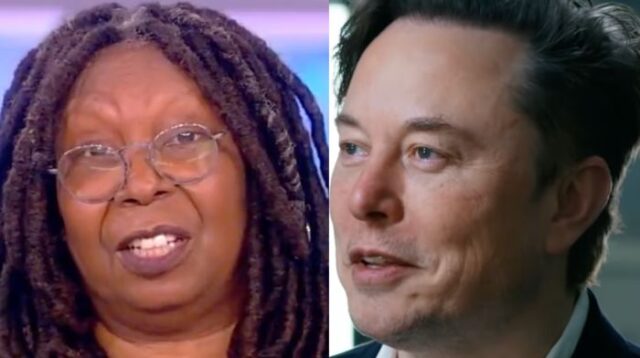 Whoopi Goldberg has quit Twitter and deactivated her account because of the billionaire Elon Musk taking over the platform.

Whoopi Goldberg has announced that she has become the latest Hollywood leftist to quit Twitter because of Elon Musk’s acquisition of the social media platform.

Goldberg revealed this on Monday’s episode of her ABC talk show “The View.”

“It’s been a little over a week since Elon Musk took over Twitter and this place is a mess,” Goldberg said on her show. “I’m getting off today because I just feel like it’s so messy, and I’m tired of now having certain kinds of attitudes blocked now getting back on.”

“So I’m gonna get out, and if it settles down enough and I feel more comfortable maybe I’ll come back. But as of tonight, I’m done with Twitter,” she added.

Goldberg proceeded to whine about things that Musk has done since taking over Twitter, including his plans to charge users $8 for blue checkmarks and suspending the liberal comedian Kathy Griffin after she impersonated him on her account.

Goldberg has since put her money where her mouth is and deactivated her account.

Goldberg isn’t the only celebrity who has said that she’s leaving Twitter in protest over Musk’s takeover. Another celebrity who has done so is Shonda Rhimes, who is the creator of shows like “Grey’s Anatomy” and “Scandal.”

“Not hanging around for whatever Elon has planned. Bye,” she tweeted days before she actually deleted her account, according to The New York Post.

“I deactivated my Twitter account today,” she said, according to US Weekly. “For a long time, but especially with its new leadership, it’s becoming more and more of a cesspool of hate & bigotry, and it’s not a place I want to be part of.”

“Only sorry for the fans, who I’ve loved connecting with for over a decade via Twitter, but I can’t say it’s a safe place for anyone, nor a social platform that will do more good than harm,” she continued.

“Especially with its new leadership, it’s becoming more and more of a cesspool of hate & bigotry, and it’s not a place I want to be a part of.” pic.twitter.com/NM3LdOd7pn

The “Madam Secretary” star Téa Leoni is another star who has deleted her Twitter account, saying that she was doing so because Musk’s version of the platform “revealed too much hate, too much in the wrong direction” for her liking.

The singer Toni Braxton claimed that she was leaving Twitter because of Musk, although at the time of this writing, she still has yet to delete her account.

“I’m shocked and appalled at some of the ‘free speech’ I’ve seen on this platform since its acquisition,” she wrote. “Hate speech under the veil of ‘free speech’ is unacceptable; therefore I am choosing to stay off Twitter as it is no longer a safe space for myself, my sons and other POC.”

I’m shocked and appalled at some of the “free speech” I’ve seen on this platform since its acquisition. Hate speech under the veil of “free speech” is unacceptable; therefore I am choosing to stay off Twitter as it is no longer a safe space for myself, my sons and other POC.

Liberals can’t stand the fact that they can no longer use Twitter as a weapon to silence conservatives and other free-thinkers. If Musk is angering people Whoopi Goldberg and other radically liberal celebrities like her, he’s clearly doing something right!