After making NCIS fans love her character, Cote de Pablo left the popular series and after a brief return, she disappeared from the spotlight.

Throughout television history, the major networks have worked tirelessly to figure out the key to creating successful TV shows. Since the mid-’90s, it has been clear that shows about law enforcement can be incredibly successful, no matter how accurate they may or may not be.

A perfect example of a show that proves how successful c****e procedural shows can be, NCIS is currently in the midst of airing its 20th season. After starting out as a spin-off, NCIS has become a ratings behemoth partly because it has introduced viewers to several popular characters and actors.
Even though so many characters have impacted NCIS, many of the show’s fans had a special connection with Cote de Pablo’s Ziva David. As a result, those fans were deeply disappointed both times the character left the show.

Now that it has been close to three years since de Pablo’s NCIS last appeared in a new episode of the show, fans are left with two questions. Why did de Pablo leave NCIS and what is she up to now?
Why Did Cote De Pablo Leave NCIS?

As NCIS fans will likely already know, Cote de Pablo left NCIS twice. First off, after joining NCIS in a guest role in 2005, de Pablo was quickly upgraded to a series star and headlined the show for years before departing in 2013.
When de Pablo initially left NCIS in 2013, it was unclear what the reason for her departure was. However, in 2016 de Pablo explained her reasoning for wanting to leave NCIS for the first time during a public Q & A.

“Unfortunately because of political things and scripts not being good enough, I chose not to [return to NCIS]. Look, I love this character! I worked for eight years crafting Ziva and when I felt like the character wasn’t being treated with the respect she deserved. They were going to send [Ziva] back to Israel to make her an unfortunate, miserable woman… and I didn’t think that was fair,”

To the excitement of many fans, de Pablo later decided to return to NCIS for a recurring role during the 16th and 17th seasons. Before that return, de Pablo explained that she would only return to the franchise if her character’s storyline was handled well.

Fortunately, when de Pablo left NCIS the second time, it seemed to be on much better terms from the outside looking in. That time around, it seemed like de Pablo exited the series simply because the storyline she returned for was over.
What Is Cote De Pablo Up To Now? 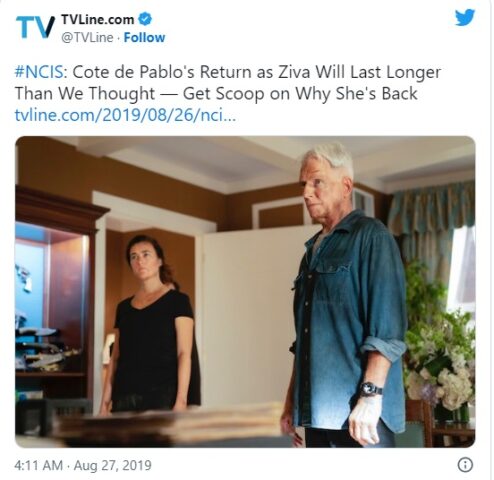 Thanks to the fact that social media is a massive force in the world today, fans have been able to feel more of a connection with many of their favorite stars than at any time in the past. After all, a lot of celebrities seem to think that a major part of their job is to share their daily lives with fans.
Given the fact that so many stars have given their fans an ever-increasing amount of access, people are used to knowing what their favorite stars are up to. Unfortunately for everyone who wants to keep up on Cote de Pablo’s life, however, they are out of luck.

In the late- 2010s, de Pablo was interviewed for the Build Series YouTube channel. During the roughly 34-minute discussion that resulted, de Pablo spoke frankly about her desire for privacy just before the 14-minute mark.

f course, there are lots of celebrities who speak about wanting their privacy. Despite that, many of those same stars seem to be the ones that tip off the paparazzi to let the tabloids know where to find them.

On the other end of the spectrum, de Pablo seems to be very sincere about wanting her privacy. After all, as of the time of this writing, there aren’t any reports about what the talented actor and stunt performer is up to.

When fans search for de Pablo on IMDb, they will find that her most recent credit was her appearances during the 17th season of NCIS. On top of that, de Pablo doesn’t have any upcoming projects listed on that website either.

In terms of de Pablo’s personal life, very little has been known about that throughout her time in the public eye. Aside from the fact that her parents are Francisco de Pablo and María Olga Fernández and that her mom worked in the television business, it is known that de Pablo dated Diego Serrano for many years. However, that couple reportedly split in 2015.

Since de Pablo left NCIS, she has remained silent about her personal life, just like her career.

Considering how talented de Pablo is, there is no reason to think her entertainment career has to end here unless that is what she desires.