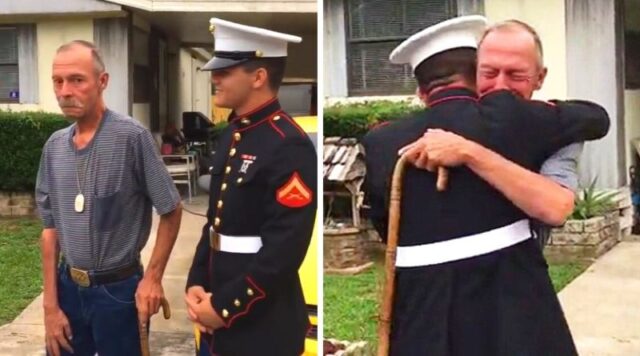 We often consider men serving in the military as the toughest men on Earth.And with that is the assumption that they’re devoid of emotions.Here’s something that runs contrary to popular belief, though.The toughest men do cry.A marine surprised his grandfather after two years of being apart.

His family members surrounded him and the kids are even running nearby.They were trying to take a picture of him.Or, that’s what he thought.Little did he know, his family had already conspired for a surprise.They timed it for his birthday.Leaning on his cane, he posed for the camera.

Then, in an instant, a man in a marine uniform stepped into the frame and stood right beside him.

At first, Jeffrey didn’t notice him. 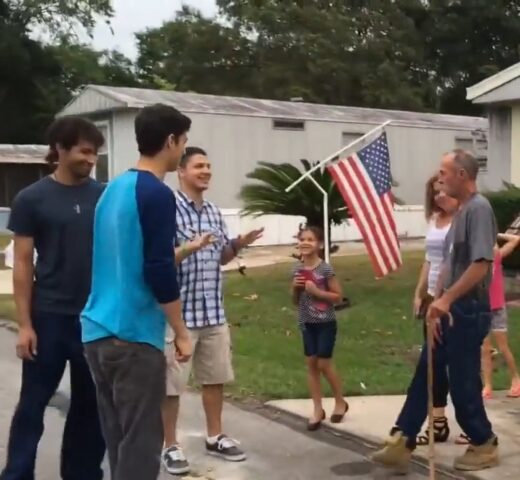 When he laid eyes on the dashing young man right beside him, Anderson almost fell.

He didn’t hold back his emotions.
The man in the marine uniform is Christian Anderson and he is Jeffrey’s grandson.

He hasn’t seen his grandson for two years and for an undisclosed reason, he also wasn’t able to attend Christian’s graduation.

So it’s not surprising that the older man was overwhelmed with emotions when he saw his grandson in his uniform for the first time. 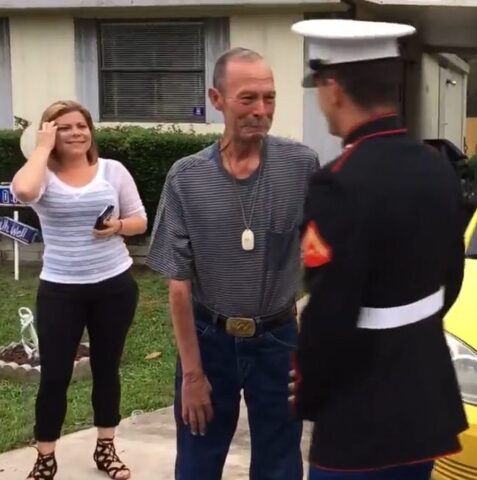 The two shared a long hug.
Maybe making up for all those hugs they missed before.

Jeffrey was crying so hard that he couldn’t even stand properly.

And even if he wasn’t standing on his cane, he tried his best to stand just so he could properly hold his grandson.

At one point, family members propped him up subtly, taking turns as Jeffrey wasn’t planning on breaking the hug.

It was a truly heartwarming moment.
A moment that resonated with a lot of people on the internet.

“Marine grandfather seeing his grandson in the same uniform must be just a rush of everything all at once. God bless the Corps!” one comment said, describing what Jeffrey would’ve felt – a combination of pride and nostalgia since he also served in the Marines himself.

“This one hit. Hard. I’m a grandpa waiting to see my grandson come home after boot camp. And I’m already crying. God Bless them both,” another comment said, providing perspective from the other side.

Indeed, it’s hard not to shed a tear.

“That is one tough gentleman standing there. Despite whatever medical condition he is fighting, go back and watch the video again and have a look at how straight and dignified that stoic man’s posture and stance are. The only thing that threw him a little off balance was seeing his grandson which melted him and his heart,” said another comment, which perfectly sums up the entire video.