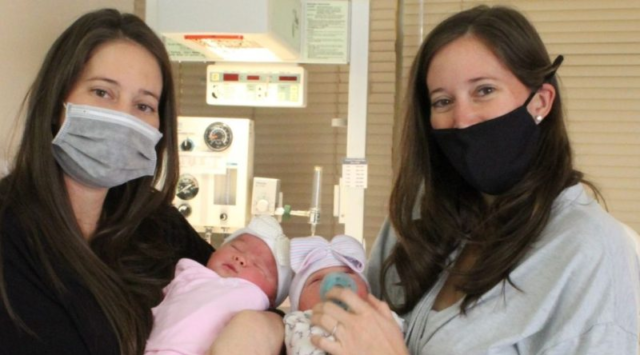 A bond shared between siblings is a very special one and one that is also irreplacable.

Your joys is twice fold when you can share it with your brother or sister. And twin sisters Amber and Autum had a lot to celebrate…

Twin sisters Autum Shaw and Amber Tramontana have been doing everything together since they were children. The sisters share an unbreakable bond with one another which they solidified further into adulthood.

The sisters made headlines when both of them delivered their babies at the same time. Both sisters gave birth to healthy baby girls, 90 minutes apart from one another on October 29th, 2020 which happened to be their own 33rd birthday!

The sisters were both checked into Fort Sanders Regional Hospital in Knoxville, Tennesse. Baby Charleston and Blakely were delivered by the same doctor, Dr. George Vick. 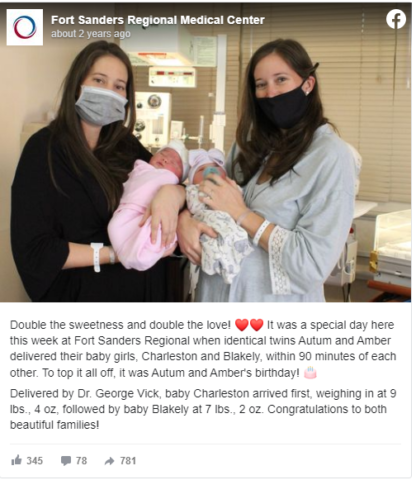 Baby Charleston was born at a healthy 9 lbs., 4 oz, and baby Blakely followed closely at 7 lbs., 2 oz. The hospital where the babies were delivered did not take the major coincidence lightly and posted about it on their social media.

They posted a picture of the twin sisters holding their bundles of joy with the caption, “Double the sweetness and double the love! ❤️❤️ It was a special day here this week at Fort Sanders Regional when identical twins Autum and Amber delivered their baby girls, Charleston and Blakely, within 90 minutes of each other. To top it all off, it was Autum and Amber’s birthday! 🎂”

The sisters share a very strong bond. The two have been inseparable even in adulthood. Amber and Autum both went to the same college for their bachelor’s and master’s degrees. The sisters then both became registered nurses and later qualified to be nurse practitioners together as well. 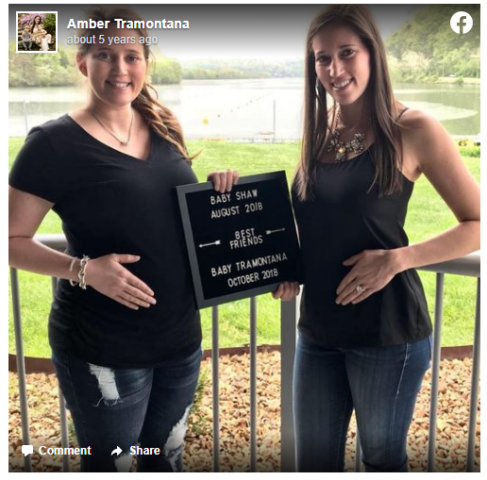 Amber and Autum both have sons who they gave birth to in 2018 at ten weeks apart. While their sons were born with a gap, the boys had identical weights and lengths.

When trying for her second baby, Autum initially suffered a miscarriage. She was heartbroken but now believes God had a plan. Soon after her miscarriage, she became pregnant again. The sisters revealed to each other they were pregnant just a few weeks into their pregnancies and realized they have the same due date!

“After our miscarriage, we struggled with ‘Why did we have to go through this?’” says Autum, “But we knew that God had a plan for us,” she adds. Amber shared how she prayed for twins and now thinks God still gave her a better way for her baby to have a companion. 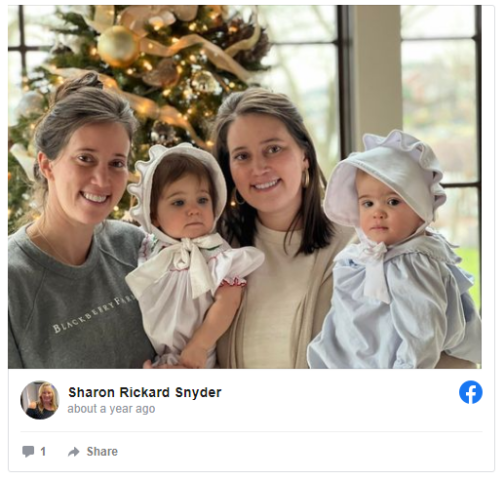 When the twins delivered their sons in 2018, it was Autum who went into labor first. Everyone assumed it would go down similarly this time as well but it was Amber who started experiencing labor first.

The sisters gave birth in adjacent rooms. According to Autum the babies bonded instantly. “They took to one another like they’d already spent nine months in the womb together,” she said.

The twins are ecstatic that their daughters have one another. They believe Charleston and Blakely will share a bond similar to the ones shared by their moms.

“It’s the birthday present that keeps getting sweeter,” said Amber.

Amber and Autum’s bond is incredibly heartwarming. And now it will hopefully continue with their daughters.

Share this heartwarming story with others to make their day!