The friendship between a dog and its owner can be incredibly strong, as everyone who has ever had a dog knows. Dogs have a great understanding of people – this has long been known.

They can interpret what we say, and, more importantly, they have an intuition that gives them a heightened sense of how we’re feeling.

Dogs are always there for you; able to provide comfort in times of sadness or join in the celebration in times of joy. 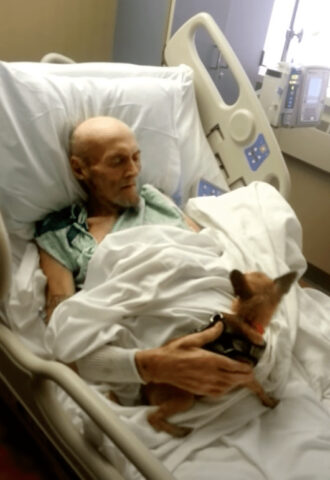 So many elderly people rely on their animals for companionship and comfort in their golden years. For many people their pets are a lifeline; they give them a reason to go on, help combat loneliness, and can even help in times of trouble.

For James Wathen, his dog was just that and when he was living through the darkest moment in his life it was his best friend that he needed more than ever.

Back in 2014, James was terminally ill. The 73-year-old man was a patient at Baptist Health in Corbin, Kentucky. During his stay at the hospital, James was separated from his beloved puppy, a one-eyed Chihuahua called Bubba.

As a result of this, they both stopped eating for six weeks.

With his illness greatly affecting his physicality and mental state, James’s nurses made it their personal mission to get the dog he spoke of fondly back to him.

The kind nurses at Baptist Health helped track him down at the Knox Whitley Animal Shelter, where Bubba had been admitted after his owner became bedridden. At the time, Bubba was under the care of a foster family. 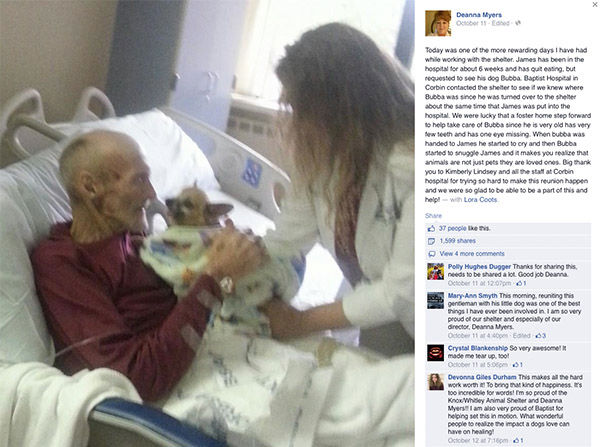 On October 11 in 2014, the nurses’ efforts paid off and James was finally reunited with his beloved Bubba at the hospital.

“When Bubba was brought to James, he started to grieve, and then Bubba began to cuddle James,” Deanna Myers, Knox Whitley Animal Shelter director, posted on Facebook, “And it makes you realize that animals are not just pets, but loved ones.”

Bubba’s presence seemed to have an immediate effect on James.

Nurses noted that the day after their reunion, Wathen seemed to have a renewed sense of energy. He was suddenly eating and sitting up in a way he never had before.

Seeing the effect his cherished pet had on his well-being, Baptist Health in Corbin is making every effort to ensure that James can have regular visits with his dog.

Watch exactly why below.

The love we have for our pets is very powerful!

Thank you Baptist Hospital and staff for letting this pet spend some time with his best friend!