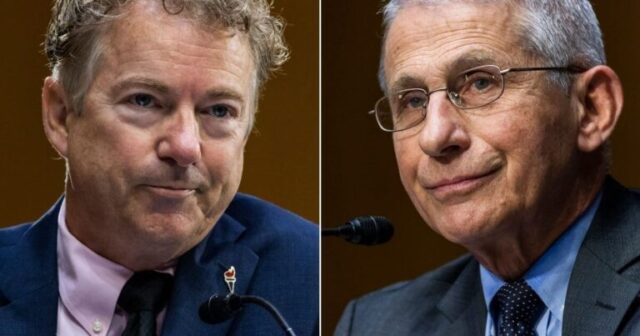 Dr. Anthony Fauci’s recent claim that he has no regrets about anything he has done in his career brought a savage rejoinder from Republican Senator Rand Paul of Kentucky.

During a recent interview, Fauci, the director of the National Institute of Allergy and Infectious Diseases, was asked if, as he prepares to retire, there was anything he would do over.

“I’m the first to admit I’m far from perfect, but when you say do over, you know, I really can’t see something that I would do completely over,” Fauci told The Washington Post.

Paul took issue with that comment during an interview on the Fox News show “Jesse Watters Primetime.”

“Likely there is no public figure, or public health figure, that has made a greater error in judgment than Dr. Fauci,” Paul said.

“The error in judgment was to fund gain-of-function research in a totalitarian country — fund research that allowed them to create super viruses that, in all likelihood, accidentally leaked into the public and caused seven million people to die,” he added.

“Think about it. This is right up there with decisions, some of them malevolent or military, to kill millions of people,” Paul said. “This is accidental, but it goes to judgment.”

“Talk about errors, you think he might apologize to the world for funding research that allowed superviruses to be created in a lab – a lab that was not properly outfitted for safety, that people were already reporting was dangerous – to support that kind of research, and then to look the other way and say, ‘Nothing to see here,’ and to cover it up.

“For the last two years, he’s been covering his tracks, but we’ve caught him red-handed and he won’t get away,” Paul said.

Paul, not holding back, slammed Fauci for going into the history books – for all the wrong reasons.

“Historically, he will be remembered for one of the worst judgments in the history of modern medicine,” he said.

Paul said when he won re-election that a COVID-19 probe is very much on his mind.

“I will not only hold Dr. Fauci accountable, we will finally investigate why your tax dollars were sent to fund dangerous research in Wuhan,” he said, according to Fox News.

In an interview Sunday with CBS, Fauci said he is the victim if political attacks.

“[T]hey’ve clearly politicized it. You know they say that- I’m not political at all, period. I’ve never been and anybody who knows anything about me knows that that’s the case. But it is very clear when people are running their campaigns with an anti-Fauci element to it. I mean, that’s ridiculous,” he said.