Skip to content
Home Stories Quarters Produced In 2004 Are Worth Thousands, And Everyone Is Scrambling To Find Them 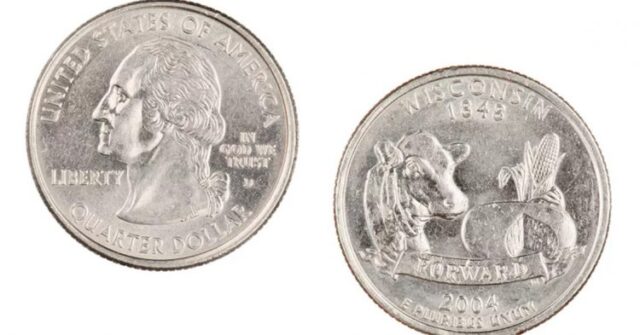 Most often, coins are worth their face value. That means a penny is worth one cent while nickel is worth five cents, a dime is worth ten cents, and a quarter is worth twenty-five cents.
“So if I have that coin and it mirrors, I might make rent?”

“I have one that has a dot right below that leaf. How to find out if it’s worth anything?”

“I have a coin from my Grandma’s collection. It sells around 1k-1.5k.”

What do you think about this valuable Wisconsin state quarter?
However, there are times when coins take on extra value beyond their face value, like when coins become demanded by collectors who like to hoard the currency and sell it at auction for as high a price as they can get.

Right now, there are 2004 quarters in circulation that could be worth as much as $2,000 apiece. These coins are so valuable because they highlight the state of Wisconsin, which shows a cow, a wheel of cheese, and an ear of horn on the back.

The front of the coins showcases the face of America’s first president, George Washington – just like most quarters minted in the last few decades.

A TikTok account named CoinHub posted a video explaining that some 2004 Wisconsin state quarters are worth thousands of dollars. These coins are so valuable because they include an extra “leaf” on the corn.

The TikTok account referred to the extra leaf on the ear of corn as a “high extra leaf,” and this increases the value of the coin exponentially. Without the extra leaf, the coin is worth about twenty-five cents per its face value.

One 2004 Wisconsin state quarter with the extra mark sold for more than $2,500. The coin was in tremendous condition and was like new.

In the viral TikTok video, CoinHub explains that the quarter in the video sold for more than $2,000 because it has the extra mark on it. The back of the quarter showcases the cow, wheel of cheese, and the ear of corn, just like every Wisconsin state quarter minted in 2004; however, this special version included an extra leaf on the ear of corn. The quarter also states, “Wisconsin 1848,” which indicates the year that Wisconsin officially became a state in the United States of America.

The video creator uses a pen to point out the extra leaf on the ear of corn. The extra leaf is located on the left-hand side of the ear of corn and curves downward toward the bottom of the coin. The special mark is directly below this leaf and has a curvature like a crescent moon.

Hundreds of TikTok users shared their reactions to the two-thousand-dollar quarter in the comment section of the viral video. Comments included things like the following:

“Who does one sell their coins to if they’re worth something?”

“I’ve been looking for this quarter with that flaw since they were first issued!”

“So if I have that coin and it mirrors, I might make rent?”

“I have one that has a dot right below that leaf. How to find out if it’s worth anything?”

“I have a coin from my Grandma’s collection. It sells around 1k-1.5k.”

What do you think about this valuable Wisconsin state quarter?