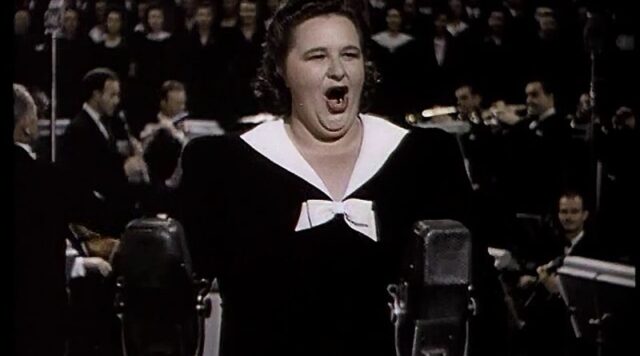 Over the years, Dean Martin would perform with many special guests.

His most patriotic performance saw him join forces with Kate Smith in a medley of American classics on ‘The Dean Martin Show.’

Surrounded by a choir of singers and dancers dressed in red, white, and blue, Dean sings with legendary stars Barbara Eden, Mickey Rooney, and Norm Crosby. The three men wear tuxedos while Barbara Eden wears a pink dress, and Kate Smith is in a sequined red and black gown.

The performance begins with Dean and Kate Smith singing ‘Yankee Doodle Dandy.’ They are joined by the others on the song ‘My Old Kentucky Home.’ The medley transitions to the classic tune, ‘You’re a Grand Old Flag,’ and the stage fills with singers and dancers.

The five superstars sing the verse and chorus while choreography happens behind them. The audience loves it. Dean steps toward the camera and quotes President Roosevelt’s introduction of Kate Smith 30 years prior as she begins ‘God Bless America.’

Kate delivers another epic rendition of the song penned by Irving Berlin. The orchestra plays the familiar fanfare as her voice soars to the song’s final high note. The audience is blown away by the majestic performance.

Kate Smith was known as ‘The Songbird of the South’ because of her popularity during World War II. She had an illustrious radio and television career that spanned 5 decades. ‘The Dean Martin Show’ ran from 1965 to 1974 for a total of 264 episodes. The theme song to the series was his 1964 hit ‘Everybody Loves Somebody,’ and Dean closes the performance with it again.

These celebrity performers came together to salute America. The results were terrific, and the audience felt a surge of patriotism from the production. This truly was a stirring performance featuring the biggest stars of the era and the legendary Kate Smith.