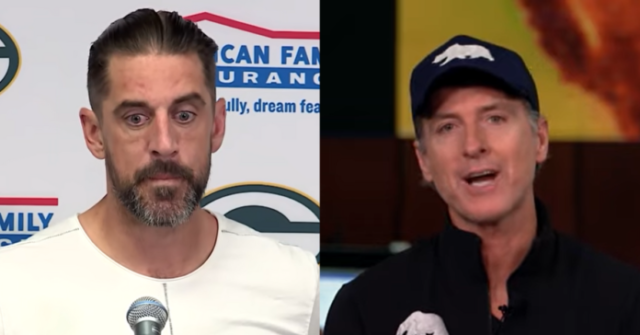 Rodgers has been a fierce critic of the woke mob and has denounced many California politicians as the hypocrites they are. When asked about California, Rodgers said: “The state’s going to sh*t but I’m hanging on.”

“I grew up in a small town, very little COVID cases up in Chico, California, but all the small businesses? F*cking gone.

“I think there’s a lot of people that believe that you should have your own decision-making on your own medical decisions.

“My thing is I have an issue with the hypocrisy in society in general and I know you do as well, but abortion has been a hot topic, right?

“And especially after Roe v. Wade got overturned and sent back to the states, or whatever.

“As much as I might lean more pro-life, I don’t want the government to tell me I can’t smoke a cigar, I can’t have a drink of alcohol, I can’t choose my own medical decisions.

“Like whether or not I agree with what you decide to do, who cares?

“And the government should not have a decision that infringes upon my own personal freedoms,” he said.