Skip to content
Home Stories NFL rookie 24, spends his $2.6 million signing bonus on a house for his mother 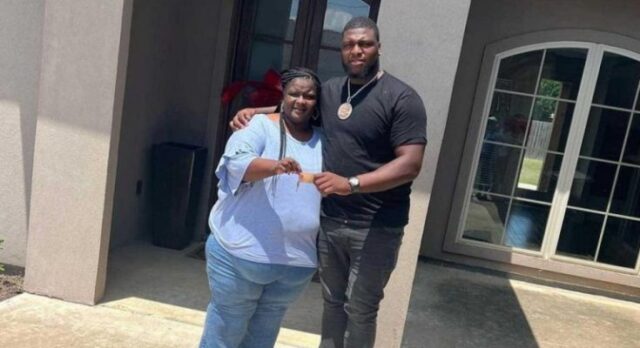 Many of us fantasies about being able to make up for all the love and guidance our parents gave us while we were growing up. No matter how big or small the gesture, it is always appreciated when someone pays you back.

One of the newest NFL players decided

to surprise his mother with the best “thank you” he could imagine after signing with the Washington Commanders: a new house. Mom, you don’t have to worry about rent any more. Phil Mathis, a Phidarian, posted something on Instagram.

The former Alabama defensive tackle joined the Commanders as a second-round choice in April and agreed to a four-year, $7.506 million contract. A $2.639 million signing bonus was included in his four-year contract. If you were 24 years old and had

just given $2 million to someone, what would you do? A portion of Mathis’ signing bonus was utilized to buy his mother a house. On his Instagram, he posted pictures and a heartwarming video of his mother visiting her home for the first time.

Mathis had a lot of options with the money he earned as a signing bonus, but he chose to give his mother some of it. What an incredible young dude. Congrats to the mother and son, too!