Skip to content
Home Stories NFL Players are Kneeling Again: This Time in Prayer, not Protest 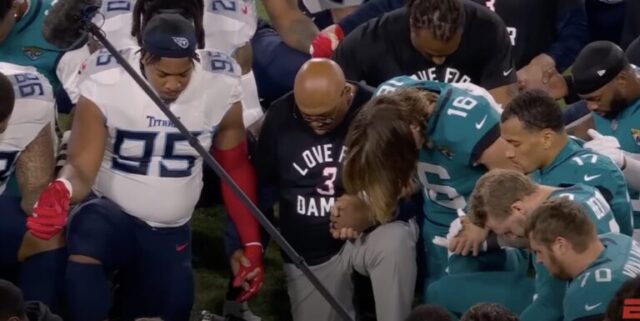 The National Football league was rocked to its core last week when Buffalo Bills safety Damar Hamlin suffered a cardiac arrest on the field following a blow to the chest on Monday Night Football. Since then, the league’s players and staff have continued to pour out support and prayer for the young Hamlin, as he recovers from the injury.

Now, Hamlin’s injury has NFL players taking a knee before the game, just like they have in recent years, but the players were no longer protesting the National Anthem. As the Tennessee Titans and Jacksonville Jaguars were set to begin their final game of the regular season, both teams met and the middle of the field and knelt in prayer to give thanks for the miraculous recovery, and continued improvement, of Damar Hamlin.

When the Denver Broncos played the Los Angeles Chargers played, another tear-jerking moment took place. Quarterback Russell Wilson and Safety Derwin James, who both wear number three for their respective teams, met at the 50-yard line to share a moment of prayer as they knelt in silence while holding hands.

Among many other similar actions across the NFL, Raiders and Chiefs players also met at the center of the field to kneel in prayer following their own game. This trend continued throughout the league this weekend.

Damar Hamlin has also been very open and outspoken about his love of God and the continued importance that his faith plays in the day to day life. He has thanked fans and opponents for coming together in prayer in numerous Tweets since his injury last Monday night.