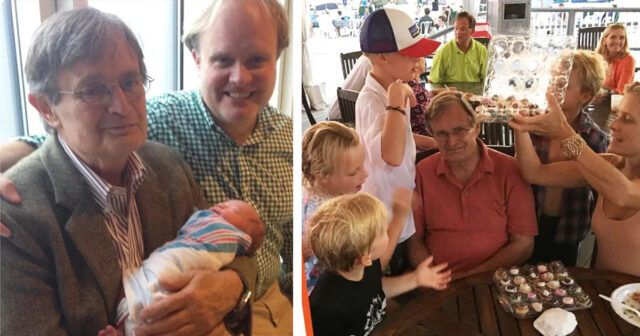 David McCallum is a proud grandfather when he’s not fighting crime on a worldly renowned TV show. However, his journey to becoming a grandpa was not smooth, as he had some marital issues.

McCallum has been married twice. His first marriage was to Jill Ireland, with whom he welcomed three children. The couple welcomed Paul and Val naturally and then, after suffering a miscarriage, welcomed their son, Jason, by adoption.

They were happily married for some time, but their marriage, unfortunately, fell apart after Ireland had an extra-marital affair with actor Charles Bronson. McCallum said he did not hate Bronson for having an affair with his wife.

He mentioned that it was difficult, mainly because they had three children, but he and Ireland managed their issues amicably. While Bronson was a fellow actor and acquaintance of McCallum’s, he didn’t let it keep him down for long, and soon he married again.

The ‘NCIS’ alum’s second marriage was to Katherine Carpenter. McCallum and Carpenter welcomed two children during their union. Their children, who they are very proud of, are named Sophie and Peter. The pair built a beautiful life together and remain in love to this day.

Carpenter and McCallum are still happily married 54 years later, in 2022. Carpenter has become a grandfather of eight children between his five children from his two marriages. He thoroughly enjoys being a grandfather and has expressed his love for his grandchildren on multiple occasions.

WHO ARE DAVID MCCALLUM’S KIDS

The actor said that he saw his two eldest children all the time and spent time with their children as well. However, he suffered a terrible loss in his youngest son from his first marriage, Jason, passing away at only 20.

Jason passed away from a drug overdose very young, and McCallum was heartbroken by the loss. Following his son’s death, McCallum went into a significant period of mourning; he shared:

“You never come to terms with the death of a child. The pain is very real, but it acts like an ache that turns into anger.”
His youngest son was adopted at one of the most challenging times in McCallum’s life, and they had a good relationship until Jason’s death. After Jason passed away, a young woman contacted McCallum with some good news.

The young woman told McCallum that she and Jason had a son, Tory, together. The actor and his family have embraced Tory, and McCallum has expressed that he hopes the young man will turn into the kind of man his father was before his death.

His son from his second marriage, Peter, is an advertising executive, and his daughter, Sophie, worked in real estate for a while. Sophie left her career in real estate to begin and raise a family of her own.

MCCALLUM AND HIS WIFE ARE PROUD GRANDPARENTS

McCallum and Carpenter are now the proud grandparents of eight grandchildren between their shared five children. The children call McCallum “Granddaddy” or “Grandducky” as he believes that “Grandpa” sounds too old.

McCallum said that he is not old and should not be called something that would make him seem old. Despite his appeal to his grandchildren not to make him seem old, he is besotted with them and never hesitates to share photographs with them.

While McCallum does not have a profile on the popular photo-sharing app Instagram, he posts his photos with his grandchildren on his profile on Facebook. Each of them is met with adoring comments by followers.

He shared one photo of his grandson wearing sunglasses and a backpack, which he called his grandson “A Young Ducky,” and then explained that it meant one young grandson. Followers commented on how the young boy looked very similar to his grandfather.

One of these special occasions was his grandson’s sixth birthday, which he celebrated in 2016. McCallum posted a photograph of the young man wearing round glasses and sipping from a straw. He mentioned that the photo was taken on the young boy’s sixth birthday.

While special occasions warrant photos of his grandchildren on their own, there are also those special occasions in which each family member is captured in the image. One of these was on the anniversary of McCallum becoming a US citizen.

Born in the UK, McCallum only became a citizen of the US later in life. To mark the anniversary of this occasion, his grandchildren bought him some sweet treats, and they all celebrated together, sitting at a round table, where his grandchildren appeared entranced by the sweets.

McCallum posts many photos and usually includes a caption to explain what the picture is about. Yet, there are those photos of moments that speak for themselves and need no caption to demonstrate the love and happiness shared in the image.

McCallum posted one such photo in early 2019. In it, McCallum sits with three grandchildren and three other adults who have not been named. The photo shows love and happiness as each person sports a content expression.

McCallum revealed that he has six boy grandchildren who live in New York and two girl grandchildren that live closer to him. Although his grandchildren live on different coasts, he sees them all often. He joked:

“I keep the boys and girls on different coasts so I can keep them straight.”
He also said that he finds it cheeky that one of his grandchildren calls him “Grandducky” but is ultimately proud to be a grandfather and enjoys having grandchildren.