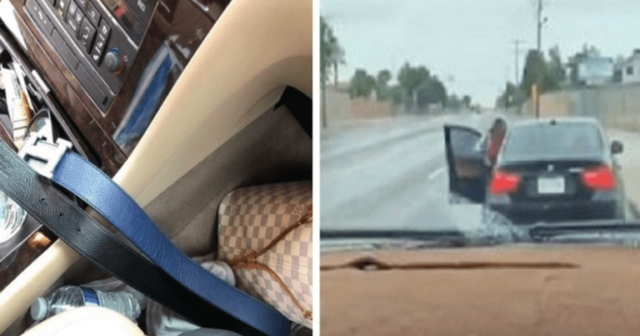 When a teen took a joyride mom’s BMW, he got served some old school Texas style parenting with a spanking right on the side of the road in this viral video.

When a 14-year-old took a joyride in his mom’s brand new BMW, he got served up some old school Texas style parenting right on the side of the road. This mom believes a proper spanking is with a belt. Worse, footage his sister took of his mom whooping him with a belt is now a viral video.

Everyone knows that parenting a teen is not easy. Mom Liza Martinez knows this first hand.

Her son, 14-year-old Aaron Campero, disconnected the WiFi so she wouldn’t be able to see that her brand new wheels were missing.

The teen then picked up some friends and went cruising around El Paso in the luxury car.

But, another mom called Martinez and that’s when things got hot fast. Mom called her daughter at home to see if the car was there. The daughter documented the day’s events as they unfolded.

“That’s when she told me to grab the belt and I really just ran into the closet and grabbed the first belt I saw,” the teen’s older sister said.“She wanted to find him before he wrecked the car and before the police did.”

Armed with a belt, this mom went in search of her son. Other moms gave her an assist by alerting him as to where he said he was going. Southern style parenting in action.

The teen thought he was sneaky but he was no match for this Texas mom.

When they found Aaron, Liza Campero rolled down her window and began screaming, “PULL OVER NOW!” Aaron’s joyride was about to end in legendary fashion.

After he pulled the car over, his mom grabbed the belt. She ran to her brand her car and began hitting her teen son while he was parked on the side of the road.

Telling my dad the tea pic.twitter.com/M1pdpX7P6h

Aaron apparently had a smirk on his face when she first opened the door but that went away quickly as she gave him a very public form of old school discipline.

In traditional Southern parenting, everyone knows a belt is a solid choice for a spanking.

Bad decisions deserve consequences and there is nothing like getting you butt whipped by your mom on the side of the road!

This Texas mom isn’t going to apologize for holding her son accountable. In addition to the whooping, she also took away his Playstation 4 and all electronic devices.

As far as the parenting choice, a belt remains a traditional choice for spanking in the South. The troublesome teens sister certainly seem non-plussed at the scene.

Plus, what actually happens when footage of your mom spanking you goes viral? In this Texas town, it builds your street cred.

The Texas teen is none the worse for wear as he was hailed a hero by classmates who call him a modern day Ferris Bueller.

Watch the mom and daughter recount the days events in the video below.

Raising children into good and productive adults means you have to establish your boundaries.

Texas mom Liza Martinez made sure her son wouldn’t go on another joyride! This is parenting done right!