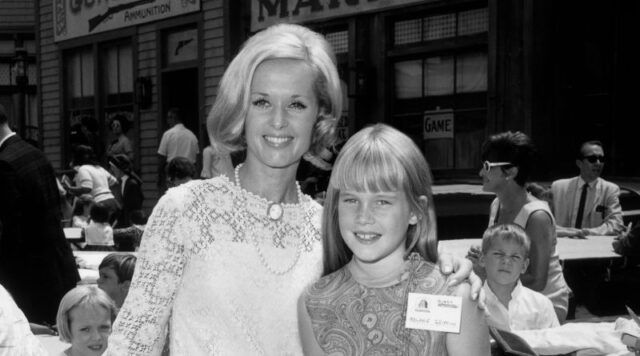 Melanie Griffith was one celebrity who spent time with her family over the 2022 Thanksgiving holiday. One of the most memorable attendees was the star’s mother, Tippi Hedren.Griffith even shared a social media image of her and her parent relaxing together over the holiday weekend.

The duo reclined on an animal-print bed in the photo as the younger actress hugged her mother.Griffith shared what she was grateful for, writing, “Thankful that my Mom is still here with us.” It was clear the pair were close as they smiled at the camera with the post of the star and her then 92-year-old mother, gaining some reactions from fans and other celebrities.

Many people noted how beautiful Hedren was, and even Griffith’s ex-husband, Antonio Banderas, left a touching comment. The actor shared his love for both women, while others added many heart emoticons. 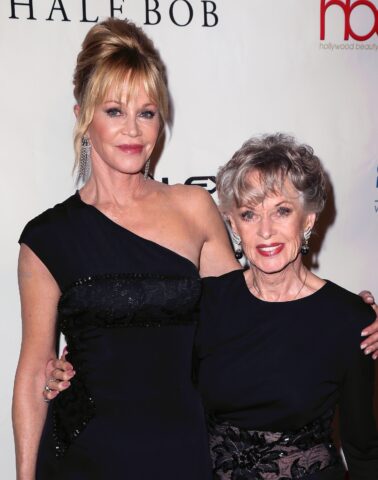 Olivia Harrison agreed with Griffith saying, “What a blessing.” A fan thought the younger actress was beautiful and believed they were lucky to still have her before wishing others a happy holiday.

Someone else thought Griffith was blessed and thankful she still had her mother. Sadly, the actress’s well-being hasn’t always been excellent, and she’s suffered some setbacks.

What’s Going On with Melanie’s Health?
In October 2017, Griffith, then 60, revealed for the first time that she had been diagnosed with epilepsy six years before. She announced the news during a Women’s Brain Health Initiative panel.

The diagnosis came after the actress experienced two seizures. The incident happened in 2011 during the Cannes Film Festival while she was on a yacht outside Cannes, France.

The star confessed to having a “major grand mal seizure.” It was so severe that she had to be taken to a Cannes hospital before returning to the boat she was on when the incident occurred.

Griffith said she had another seizure and had to go back to the hospital, where they did an EEG and began looking into her condition seriously. The star then returned to the United States (US), and that was when she was diagnosed with epilepsy.

The actress noted how in over 20 years, no one had paid enough attention to her to give her the diagnosis. By 2019, the celebrity had been seizure-free for four years and revealed that the illness was caused by stress.

Griffith said every seizure occurred when she was “extremely stressed.” The star revealed that she started having fewer incidents after she divorced Banderas, with whom she was married for almost 20 years.

Despite her health issues, the Golden Globe nominee was grateful for receiving the best health care. In 2019, the actress went to San Diego, California’s Health Nucleus facility for genome testing to see if she still had the illness.

Luckily for her, the results were negative. Griffith said doctors took tests on her brain and couldn’t find the illness or anything wrong with her because the stress was the cause of it.

She was lucky to have been able to visit a new high-tech facility where she received as much information as possible. Griffith might be close and have the support of her mother through all her trials, but her childhood was different.

“It Was a Crazy Time:” Melanie on Her Childhood with Her Mother
It was Heden’s 92 birthday in January 2022, with Griffith, then 64, honoring her with a social media post to mark the day. The younger actress shared a carousel of Instagram images that showed her mother over the years.

[Melanie] Griffith confirmed the news saying they didn’t socialize with the animals like they used to.

Two black-and-white photos showed Hedren being silly when she was younger. There was also one picture of the older actress standing with baby Griffith outside an airplane, with the more youthful star writing:

“Happy Birthday, Mom!! You are so beautiful, tenacious, gracious, elegant, and YOU ARE 92!!”

In 2020, the Academy Award-nominated star reminisced about her childhood in California, where she grew up with wild animals like tigers and lions! Sharing several photos on Instagram, the actress showed herself and Hedren enjoying their home in the 1970s with some of the animals.

Griffith revealed how she’d grown up with two elephants, lions, and tigers! Hedren once confessed that she’d realized and regretted having a full-grown lion live with her family and shouldn’t have taken that kind of risk; however, it wasn’t all bad with her daughter writing in her post:

“It was a crazy, beautiful, and dangerous time.”

The “Working Girl” actress noted how grateful she was for the strength it gave her and said she’d learned a lot about interacting with the animals. One lesson she got was that it was unwise to show fear around big cats, even when they were cubs.

Although Hedren was regretful, she still lived with big cats, but they’re at her Acton, California Shambala Preserve animal sanctuary. Griffith confirmed the news saying they didn’t socialize with the animals like they used to.