Skip to content
Home Stories Man Plans to Prank His Fiancée Saying ‘No’ at the Altar, She Says ‘No’ First – Story of the Day 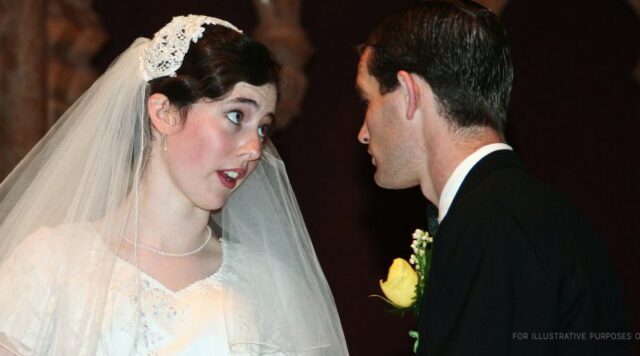 At his wedding, a man had planned to prank his bride by refusing to marry her, but instead, his bride said she didn’t want to marry him. “But why?” he asked before the guests gasped in shock when they heard the reason.”I can’t believe I’m finally marrying Alex tomorrow!” Mary smiled and shook her head.

“We’re all so excited about your wedding!” Sarah hugged her.Mary was at a bar with her best friends, Sarah and Stacey, recalling her love story. She met Alex in high school, and they dated for about seven years before deciding to tie the knot.The couple was known for playing pranks on each other and on the people around them.

Mary and Alex enjoyed jokes and believed a good laugh was enough to make everything right.

Their friends had never seen them fight or even argue because Mary and Alex always talked to each other whenever they disagreed or misunderstood something.

“I’ll be right back from the bathroom, girls,” Stacey rose to her feet.

“I’ll come with you,” Sarah said before the pair left Mary.

Why haven’t they returned yet? Mary wondered five minutes later. I think I should go check, she thought and headed toward the bathroom. Sarah and Stacey’s conversation caught her attention when she was about to open the door.

“Mary has no clue about Alex’s prank! She’s going to cry when he does that,” Stacey laughed.

“I hope she doesn’t take it too seriously,” Sarah said before Mary interrupted their conversation.

Sarah and Stacey’s smiles faded upon seeing Mary standing inside the bathroom. “What are you doing here?” Sarah asked.

“I know you cheated on me with Stacey!” Mary screeched before the guests inside the church gasped.
“Are you guys hiding something from me?” Mary’s brows furrowed. “I want to know what it is.”

“We’re not hiding anything, Mary. Come on,” Stacey chuckled. “Let’s go have dinner.”

“I won’t go anywhere unless you both tell me what you were talking about,” Mary said sternly. “I mean it!”

Sarah and Stacey looked at each other before they confessed they were hiding something from the bride-to-be. “Look, Alex wants to prank you at the altar tomorrow,” Sarah said. “He told us he will say ‘no’ when the priest asks him if he wants to marry you.”

“Yes,” Stacey replied. “And then he plans to sing a song he has written himself. What was it, Sarah?”

“I will never leave you…” Sarah sang.

“And then he wants to surprise you with your dream car,” Stacey said.

“What? My dream car?” Mary’s eyes widened. “You shouldn’t have told me this!”

“I’m just kidding. Relax,” Mary laughed. “Since you both have ruined his prank, I think I know what to do now.”

“Yeah. You made us do this, Mary,” Sarah smiled.

“Okay, okay, relax,” Mary said. “Listen, now I want you girls to keep my secret and tell the priest to ask me first if I want to marry Alex, and then I’ll be the first one to say no.”

“Are you sure about this, Mary?” Sarah asked skeptically.

“Yes! Alex won’t be expecting this,” Mary said. “And then, I’ll sing the same song Alex wrote. He sent it to you guys, right?”

“Yeah, he did,” Sarah replied.

“Perfect! Send it to me tonight. I think this is the best prank to date,” Mary exclaimed. “Now, let’s go have dinner.”

The next day inside the church…

Alex and Mary were standing near the altar while the guests had their eyes on them. Soon, the priest arrived and asked the bride if she wanted to marry Alex.

“No,” Mary said before Alex’s sly smile slowly faded. He looked at Stacey and Sarah, who avoided eye contact with him.

“You know why, Alex!” Mary yelled, trying her best to control her laughter. She didn’t want Alex to know it was a prank.

“I know you cheated on me with Stacey!” Mary screeched before the guests inside the church gasped. No one could believe that Alex had cheated on Mary.

Okay, this is getting pretty serious now. I think I should tell him, Mary thought, but before she could say anything, Alex said something she wasn’t expecting.

“It happened just once, Mary,” Alex looked into her eyes. “I cheated on you back when we started dating. It doesn’t matter now. Come on.”

Mary’s eyes widened, and she turned to look at Stacey, who was looking at the ground.

“How could you?” Mary said as tears rolled down her cheeks. She could feel her heart pound as she walked towards the exit while the guests looked at her. All she could hear was people mumbling. I had no idea Stacey would stab me in the back like this, Mary thought.

Suddenly, music started playing in the background, and Alex sang, “I have never cheated on you… And I will never cheat on you with your girlfriends…”

The guests began laughing, and Stacey rushed to Mary and hugged her. “This was Alex’s idea! I promise!” she chuckled.

Mary wiped her tears and smiled while walking back to the altar. Meanwhile, Stacey and Sarah told her what happened last night.

“After you caught us in the bathroom, we felt guilty and told everything to Alex,” Sarah explained.

“And that’s when Alex said he would play along and pretend that he cheated on you with me,” Stacey added. “I told him it was a bad idea, but he didn’t listen.”

When Mary reached the altar, she jokingly punched Alex on the chest and said, “You love staying ahead of me, don’t you?”

“You know I love you so much,” Alex laughed.

Then, the priest continued where he had left off, and Alex and Mary tied the knot while the guests cheered for them. The couple was sure everyone in the church would remember their wedding for a long time.

Sometimes, things don’t go as expected. While Mary thought she would pull a prank on Alex, she had no idea that her girlfriends had told him about her plan. Things didn’t go as she had planned.
Confess before it’s too late. Alex confessed that he was joking before Mary left the church. Had he taken a few more seconds to sing the song, Mary would have thought he was serious, and things would have worsened.
Share this story with your friends and family. It might inspire them and brighten their day.