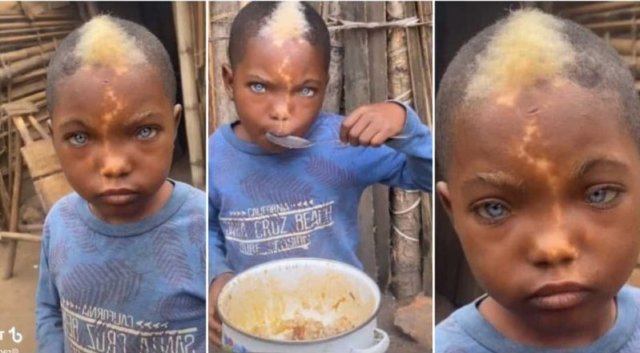 The video has garnered international attention for the little boy because of his striking features.

People are referring to him as an “angel” because of his beautiful features.

A little black boy from Africa has sent the internet into a frenzy over his striking features. While no one is sure of the boy’s name and other information, they are definitely awestruck at his features. 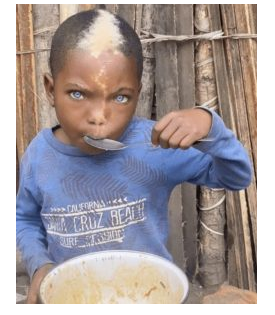 While there are no details known about the child as to his age or name, people are enchanted by his beauty. The little black boy has natural blue eyes that are vivid and piercing to anyone he looks at.

He also has a patch of white hair at the front of his head which seemingly spreads to his face a lightning-like scar that makes him look otherworldly or as some commenters think “an angel.”

The person who posted this video is named Raoul Tsasa and from his description, he is from the Netherlands. 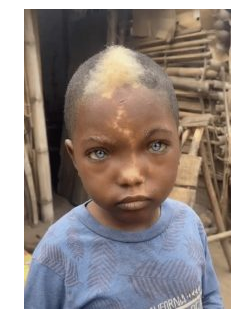 People were convinced the child has a bright future ahead of him because of his odd yet enchanting look. One user named Duc Nambouri said, “He looks so unique. He shouldn’t struggle to be a great actor. He already stands out among the crowd.”

Another TikTok user named Michael Brown-Herrer commented, “He is a masterpiece of beauty.”

The general consensus was the child was beautiful. But there were those who had peculiar ideas of how he came to look the way he did.

One user named Lunar Moon wrote, “He’s so beautiful. I keep thinking he was kissed by lightning.”

Another user named Jamie La Chaky wrote her suspicious as, “I believe he has Waardenburg Syndrome.”

According to medical websites, Waardenburg syndrome is a group of genetic conditions that cause changes in the color (pigmentation) of hair, skin, and eyes in people who have it. It can also cause some amount of hearing loss

But everyone agreed that the child was beautiful indeed.

This child has piercing beauty that really stops you in your tracks. What do you think of this looks?

Share this piece with your friends and family to show them what a beautiful child this is!