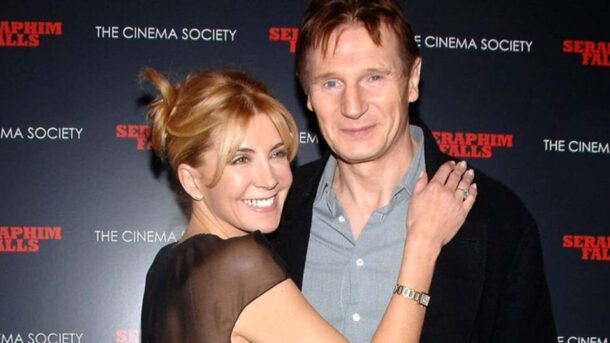 Liam Neeson is still very much in love with his late wife. The Ireland native was previously married to Natasha Richardson from 1994 until her untimely death following a skiing accident in 2009.She was just 45 years old at the time and the beloved actress leaves behind sons Micheál, 26, and Daniel, 25. Their 70-year-old father hasn’t remarried since her death.

Neeson met the British actress while starring opposite each other in Anna Christie on Broadway in 1993. The Parent Trap actress was 29 then and married to producer Robert Fox but when she met Neeson she knew he was the one. “She was a radiant beauty. Yeah, cascading hair. I remember. There was—that was very, very attractive.

I’d never had that kind of an explosive chemistry situation with an actor, or actress,” Neeson told Anderson Cooper on 60 Minutes. “We had just this wonderful kind of dance—free dance on stage every night. She and I were like [Fred] Astaire and [Ginger] Rogers.”

In March 2009, Richardson was on a ski vacation in Quebec, Canada, with her oldest son, Micheal. The vivacious actress was coming down a beginner’s slope on Mont Tremblant when she fell and hit her head. Unfortunately, Richardson, the daughter of famed British actress Vanessa Redgrave, wasn’t wearing a helmet at the time. Since she felt fine right after the fall, she didn’t realize how serious the impact was and reportedly turned down medical attention.

Neeson was in Toronto filming a movie when she called him. “I spoke to her and she said, “Oh, darling. I’ve taken a tumble in the snow.” That’s how she described it,” he shared. Her children were just were just 13 and 12 when she died. Neeson recalled, “She cared for everybody. She has– she has a motherly instinct. And she’d make dinners for everyone and just looked after us all. You know?

Neeson’s love for her continues to live on as he mentioned he visits her grave which is close to his home in upstate New York every day. According to The Sun, “I speak to her everyday at her grave which is about a mile and half down the road.

I go down there quite often, so I do speak to her as if she’s here. Not that she answers me.” What a beautiful gesture of love from the Taken actor.