During the trip, the couple met several important people – including Caroline Kennedy. But even before they stepped on US soil, the royals were being praised for their decision not to fly private.

William and Kate have taken on many duties after becoming Prince and Princess of Wales after the Queen’s passing. For them, as well as for Charles and Camilla, Queen Consort, it has been a period of significant change. Kate herself is said to have been very stressed and anxious.

Yet now, it seems like she’s also become someone to rely on when trouble arises. According to body language expert Judi James, the Princess of Wales did plenty for her husband and future king, William, during the US trip – especially when he looked agitated. At the same time, though, Kate showed signs that she was under pressure. 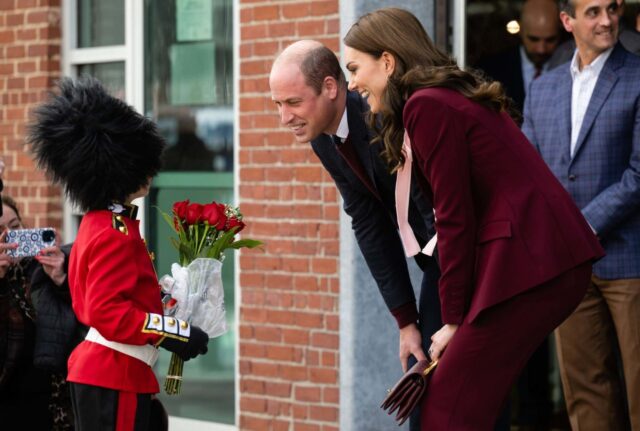 Prince William and Kate Middleton are starting to settle into new roles within the Royal Family. When the Queen passed away in September, they became Prince and Princess of Wales, and with those titles came new responsibilities regarding the Crown.

William and Kate recently moved into their new home on the Windsor Castle grounds. Adelaide Cottage now serves as the home for the heir to the throne and his family. He and Kate’s children, Prince George, Prince Louis, and Princess Charlotte, have all started at new schools, too.

William & Kate visits the US
Though the two parents visit many places around the United Kingdom, it’s reported that they always come home to their children at night.

This past week, though, William and Kate have been away from their children, on a trip to the US.

The much-anticipated engagement has been in the works for several months. Royal fans may know that William founded the Earthshot Prize in 2020, which then became an independent charity earlier this year. William serves as its president.

The Prince was supposed to attend the September Earthshot Prize Innovation Summit in New York. Sadly, he had to cancel because of the Queen’s sudden passing.

“Protecting the environment was a cause close to my grandmother’s heart. And I know she would have been delighted to hear about this event and the support you’re all giving our Earthshot finalists, the next generation of environmental pioneers,” William said in a recorded message in September.

But even before they touched down at the airport, the couple seemed to have found themselves a special place in many people’s hearts. When traveling “across the pond” to the US, William and Kate didn’t use a private jet – instead traveling on a commercial flight. 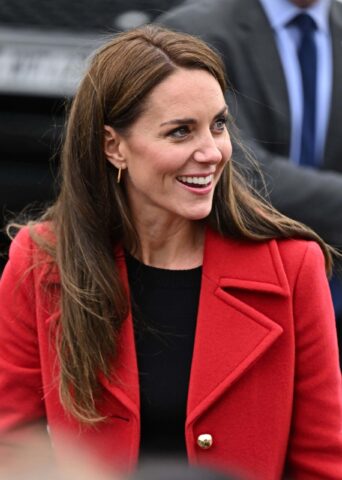 As reported by CBS, it didn’t take long before passengers came to learn that the royals were on the flight. The flight crew described the couple as “utterly delightful,” with passengers praising them for not flying private.

William & Kate praised for choosing commercial flight
“As soon as people saw them get on you could tell there was a buzz on the airplane,” passenger Jonathan Wood said. “It was a wild experience, but it was great.”

“Surprising … you assume they’d have a private jet,” passenger Jo Atkins told CBS. “[William is] a lot slimmer… can I say that? He’s very slight. She’s beautiful, obviously, as one would expect. I didn’t expect that getting on the plane.”

During the seven-hour flight, William and Kate remained low-key. They did, however, chat with some of their fellow First Class passengers about what they were doing in Boston.

After landing, passengers had to wait on the plane while William and Kate left. At Boston Logan International Airport, they were greeted by Massachusetts Gov. Charlie Baker and Lt. Gov. Karyn Polito.

Upon landing, William thanked the locals “for their many tributes paid to the late queen,” adding that Queen Elizabeth recalled her 1976 visit to Boston “with great fondness.” 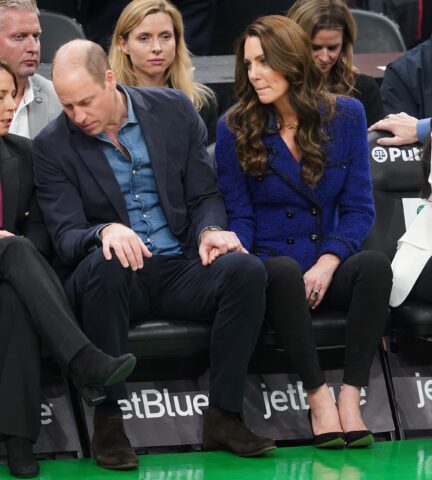 Not only did William and Kate attend the Earthshot Prize Innovation Summit while in Boston, but also visited several other places, including North America’s largest clean-tech incubator, Greentown Labs.

“It’s a dream come true”
Many stood outside in the freezing cold to see the royals. One who got the chance to meet William and Kate was 8-year-old Henry Dynov-Teixeira, who presented them with red roses while dressed as a Buckingham Palace guard.

“I am going to scream and tell my best friend that I am now famous,” Henry said.

His mother, Irina, added: “We bought it in London in the summer and he wore it for Halloween.”

As mentioned, many queued for a long time to see the royals. When they finally arrived and greeted hundreds of people in the borough of Chelsea, one woman even collapsed in tears, according to the Mirror.

20-year-old Ashley Langan had made a sign that said: “Welcome to Boston, Your Highness.” When William and Kate stopped to admire the sign, she couldn’t have been happier.

“It’s a dream come true, really it is. If I had told myself ten years ago that this would happen, I wouldn’t have believed me. I love them as a couple and the work they do,” Ashley said. 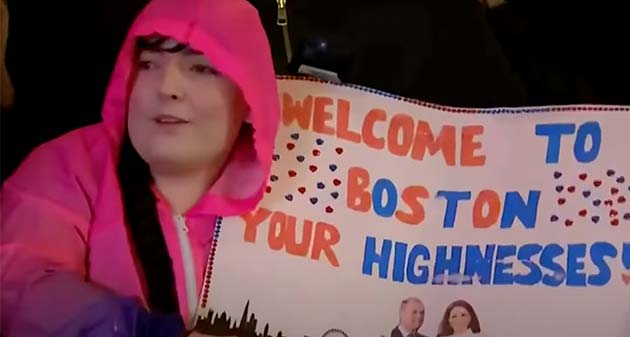 During an event before the Eartthshot Prize, William and Kate met with Boston mayor, Michelle Wu, and the US ambassador to Australia, Caroline Kennedy.

Wiliam having “inner tensions”, body language expert says
William said in a speech that he and Kate were both “looking forward to spending the next few days learning about the innovative ways the people of Massachusetts are tackling climate change.”

For the trip, the royals also attended a sporting event to watch NBA team the Boston Celtics play.

Both Kate and William were seen smiling as they greeted the crowd.

“The normally tactile-shy couple are using three key tie-signs or cues to suggest a mutual need to register unusually high signals of love, support, and togetherness,” body language expert Judi James told The Sun about William and Kate’s appearance at the basketball game.

“Their arms are pressed together from just above the elbow to the wrists and when William stops leaning away to chat they will likely be pinned at the shoulders, too.”

“She has done this PDA before but it has been more of a fleeting gesture but here it is getting validation from William’s reciprocal response. He places his own hand on top of hers and even curls his fingers around her hand to keep it in place,” she said.

Kate showing signs of being under pressure
When Queen Elizabeth passed away, William and Kate – and the rest of the Royal Family – had a seemingly endless list of things to do. Not only were they charged with presenting a united front, but also to help usher the family into a new era. That no to mention the behind-the-scenes struggles that will have gone on in private, as well as the fact that William and Kate were in the middle of moving and helping their children adjust at home and in their new schools.

At that time, it was reported that Kate was very anxious and stressed. According to Judy James, that still seems to be the case. The body language expert added that Kate has, on the one hand, was “immaculate” during their visit to the US, but that she’s showing signs of being under a lot of pressure.

“Kate’s smile has been as immaculate as usual in Boston but here she sucks her lips in,” she said.

“This is another sensory trick. Lips have the densest concentration of nerve endings of any part of the body and pressing and sucking them in like this can be a self-comfort ritual under pressure.”

It’s not the first time that Kate has proven to be a calming influence, one who tries to help her family members when needed.

During the Remembrance Sunday Service some weeks ago, body expert Judi James claimed that Kate made a polite but concerning gesture to Camilla, as the Queen Consort looked “anxious.”

Kate helped calm down Camilla
Speaking to the Mirror, James said that it was clear that the Remembrance Day service was a ‘nerve-wracking’ occasion for Camilla.

It was her first time attending the service as Queen Consort. Luckily, Kate was there to provide her with a sense of calm.

“Watching from the balcony Camilla combined signals of regal duty with some rituals of anxiety. Standing beside Kate, she performed a subtle smile of acknowledgment as her wreath was laid, and as she turned to Kate on their way from the balcony she threw a rather fond smile as Kate spoke to her,” James said.

“Camilla smiled at Kate for a second time before nodding, again in a gesture of acknowledgment as she walked ahead of Kate in her new role of Queen. Otherwise, though, there were gestures of open anxiety from Camilla. She looked unable to keep totally still and spoke to Kate at one point but while looking straight ahead rather than turning to her.”

Judi James added: “Kate turned her head quickly in a gesture of polite concern. Kate’s calm and very still body language was in contrast to Camilla’s nervous movements that showed the most in the fluttering of her hymn sheet as her two hands fiddled with it throughout.”

This time, William and Kate’s children did not travel with their parents. Instead, they stayed at home in London, as they still had to attend school.

Who is taking care of George, Charlotte & Louis?
During their parents’ US trip, Prince George, Princess Charlotte, and Prince Louis have been taken care of by Kate’s parents, and their longtime nanny, Maria Teresa Turrion Borrallo.

Borrallo has been with the Prince and Princess of Wales since 2014; she began taking care of George when he was only eight months old.

“She is not married and doesn’t have a boyfriend, as her life is totally dedicated to the family she is working with. She is known for being totally professional – married to the job,” an insider told Hello Magazine.

“They are always asking us where we are going. “And we show them where we are on the map,” William said during their 2022 March trip to the Caribbean.

“We let them know where we are, and [George] finds us on the map and puts a pin in it and shares with the others.”

Please share this article on Facebook if you think William and Kate are doing a fine job as the Prince and Princess of Wales!