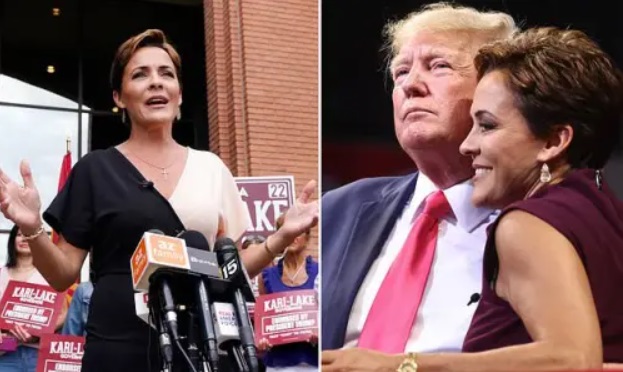 Arizona Republican Kari Lake is promising a strong legal challenge to the outcome of her race with Secretary of State Katie Hobbs for the state’s governor’s office.

Hobbs certified her own win over Lake on Monday by approximately 17,000 votes, with Arizona Gov. Doug Ducey, Attorney General Mark Brnovich, and state Supreme Court Chief Justice Robert Brutinel there as witnesses, according to ABC News.

With the certification complete, Lake has five days to file legal challenges in court.

“We’re ready to go with what we believe to be an exceptional lawsuit. And we believe we will be victorious in that lawsuit,” Lake told Real America’s Voice “War Room” host Steve Bannon.

“We’ll take it all the way to the Supreme Court if we have to. We will not stop fighting. Because the people of Arizona were disenfranchised,” she continued.

“The voters who decided to go to the polls on Election Day, as stated in our Arizona Constitution, were disenfranchised,” Lake said.

.@KariLake: “We’re ready to go with what we believe to be an exceptional lawsuit. And we believe we will be victorious in that lawsuit. We’ll take it all the way to the Supreme Court, if we have to. We will not stop fighting. Because the people of Arizona were disenfranchised.” pic.twitter.com/NCqqjzlmt0

The Republican predicted, “It’s going to be real ugly” with Hobbs trying to govern if Arizonans don’t believe she really won.

Lake held the lead in nearly every poll in the six-week period leading up to the election, including by double digits in one survey conducted by the local Fox affiliate in late October.

FOX 10 Insider poll now has Kari Lake up over opponent Katie Hobbs by 11 points in the Arizona gubernatorial race 👀 pic.twitter.com/Wog4WQgqbP

The RealClearPolitics average of polls found Lake with a 3.5 percent advantage on Election Day, yet Hobbs won by 0.6 percent margin.

Republican U.S. Senate candidate Blake Masters also lost his race to incumbent Sen. Mark Kelly by about 5 percent (about 125,000 votes), but that loss is easier to explain.

Masters experienced a surge that showed up in polling by late October and early November allowing him to close the gap to a dead heat with Kelly.

Working against Masters pulling off the upset with a late surge was that early voting started in the Grand Canyon State on Oct. 12, so Kelly was banking votes for weeks.

Also running contrary to Masters and Lake winning was the Election Day chaos that took place in Maricopa County (the Phoenix metro area), when ballot tabulators and ballot printers were not functioning at 71 polling locations, according to the county — though the Lake campaign puts the number at 114, or 53 percent of the sites.

All the machines were required to be tested and the ballot printers were used in early voting, yet these strange, widespread problems still occurred, likely impacting thousands of would-be voters.

Hours-long lines developed at multiple sites experiencing these problems, leading the Lake campaign to argue that since Republicans voted 3-to-1 over Democrats on Election Day, what happened was large-scale vote suppression of her supporters.

Hours-long lines developed at multiple sites experiencing these problems, leading the Lake campaign to argue that since Republicans voted 3-to-1 over Democrats on Election Day, what happened was large-scale vote suppression of her supporters.

Here is one example I witnessed firsthand in the ruby-red community of Anthem on the north side of Phoenix, where the line was about two hours both at midday and again at 6 p.m.

Here is the problem w/ what happened in Maricopa County on Election Day. This is Anthem, north of Phoenix at about 1:15 pm. Ruby red district of about 30K people. Only one polling location. Ballot tabulators not working in the morning. 2 hr wait to vote midday and still at 6 pm. pic.twitter.com/CY35yQWwq5

Poll worker Mike Peterson told the Maricopa County Board of Supervisors last week that hundreds of people at his voting location in the Paradise Valley area of Phoenix were, in effect, disenfranchised.

Peterson said 675 potential voters were waiting in line when his location officially closed at 7 p.m. The would-be voters could have stayed in line and waited to cast a ballot, but most apparently gave up.

“Of those 675, do you know how many came in? One hundred and fifty. It means that you have personally disenfranchised voters. They have [come], they have seen and they have given up because they know what is going on,” he said.

In other words, more than 500 people who clearly wanted to vote did not, and that was just voters who showed up near the end of Election Day at one site.

This figure would not include those who might have been discouraged by long lines during the day.

“Every single one of us who’s a poll worker right now is making fun of you” pic.twitter.com/HjXrWM50Bx

Given the approximately 17,000 votes separating Lake and Hobbs, it would take a net of about 240 Lake supporters being prevented or discouraged from voting in each of the 70 ill-functioning polling stations to make the difference. If the true number of polling locations experiencing issues was 114, that would translate to 149 voters per location.

No doubt, these kinds of figures will be at the heart of Lake’s suit, along with issues raised by the Arizona Attorney General’s office in a Nov. 19 letter to the Maricopa Board of Supervisors regarding election law concerning the tabulation of ballots evidently not being followed at polling locations.

The Lake campaign has called for a revote of the election in Maricopa County.

Lake told Fox News host Tucker Carlson Monday night, “We’re going to be drawing up some lawsuits in our election because we won’t have elections that are run like they’re run in Third World countries.”

.@KariLake: “We’re sick of @katiehobbs‘ office and the Secretary of State’s office and what they’ve been up to. And we’re going to start fighting back, and we’re going to be drawing up some lawsuits in our elections… We have too much to save in this country.” pic.twitter.com/NWz1yPfJmN

“We have too much to save in this country to have our elections be run in that way,” she added.