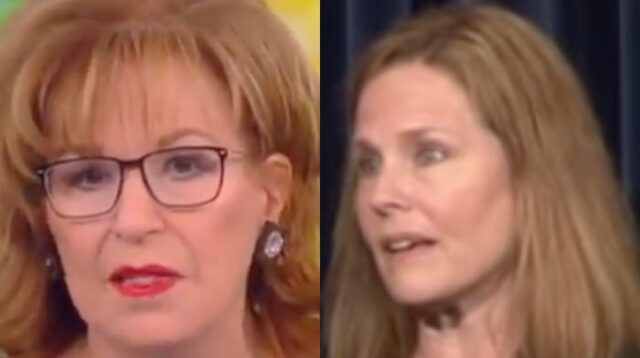 Joy Behar was humiliated on Tuesday morning when she was forced to apologize for a false attack on Amy Coney Barrett.

Joy Behar was forced to apologize on Tuesday’s episode of her ABC talk show “The View” after she falsely claimed that Supreme Court Justice Amy Coney Barrett is a member of a Christian “hate group.”

A day late and a dollar short.
Joy Behar is made to walk back a false statement she made yesterday when she lied about Justice Amy COney Barrett being a member of a “hate group.”
“I just got them mixed up with another group. It was inaccurate.” pic.twitter.com/6Y1c4kqID0

“I have to clarify something I said yesterday,” Behar said at the start of the show. “I want to correct something I said on air when I stated that People of Praise had been deemed a hate group.”

“I just got them mixed up with another group. It was inaccurate,” she added. “So I don’t think that’s right that I should – I have to say, you know, sorry about that.”

Behar concluded by saying that she “conflated” People of Praise with another group, though she did not reveal which group this would be. Her co-host Whoopi Goldberg tried to lighten the mood by saying that mistakes like this happen, joking that she often confuses Behar with her much-younger co-host Sara Haines.

The Daily Caller reported that this came one day after Behar falsely claimed that the Southern Poverty Law Center has publicly deemed People of Praise to be a “hate group.”

“She [Barrett] is a religious person, she belongs to this People of Praise group, which the Southern Poverty Law Center has labeled them a hate group,” Behar said. “And their founder has questioned the so-called ‘separation of church and state,’ they believe that sex should occur only within marriage, and of course between a man and a woman. They’ve got very specific things that they believe.”

Anti-Catholic bigotry on The View.
The cast calls for Justice Amy Coney Barrett to recuse herself from a religious liberty case because she’s Catholic.
Joy Behar accuses ACB of renouncing her faith and was corrected.
Sunny whines that Catholic justices don’t all recuse themselves pic.twitter.com/7j5Ss13ag6

People of Praise is a group that describes itself as a “multi-denominational “charismatic Christian community” on its website. The group also honors the first Christians “who were led by the Holy Spirit to form a community.”

“Jesus desires unity for all people,” the group said. “We live out this unity the best we can, in spite of the divisions within Christianity. We are Roman Catholics, Lutherans, Episcopalians, Methodists, Pentecostals, Presbyterians and other denominational and nondenominational Christians.”

Now that doesn’t sound very much like a hate group, does it?

Amy Coney Barrett took her seat on the SCOTUS two years ago today. Below is a memory from my FB. Read the words a couple time…🇺🇸🇺🇸🇺🇸 pic.twitter.com/SbnUI7lKYl

Earlier this year, Behar described the Supreme Court’s overturn of Roe v. Wade as being “just the beginning” since the court has a conservative majority.

“Next, they’ll go after gay marriage and maybe Brown v. Board of Education,” she said, according to The Hill. “I see fascism down the line here.”

Behar then accused Barrett, Brett Kavanaugh, and Neil Gorsuch, each of whom were appointed by the former President Donald Trump, of lying during their confirmation hearings.

“It sounds to me that all of them felt it was a precedent and they would honor the precedent,” she said. “And now it’s the complete opposite.”

Whoopi wants viewers to know it was only a draft and “your rights are still in place.” pic.twitter.com/k25b2nhj3u

Behar has shown time and time again that she’s one of the most hateful leftists on television. We’re glad to see that after her latest vile attack on Barrett, she was forced to back down with her tail between her legs.