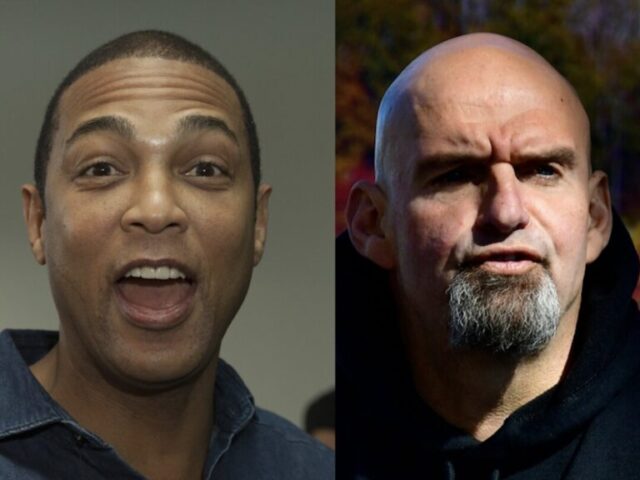 Don Lemon is settling into his demotion quite nicely, it would seem. At least, that’s the appearance one gets by observing just five seconds. He hasn’t lost his panache for whipping up fake frenzies or fear-mongering over peoples’ basic rights to exist.

He also hasn’t stopped pushing the radical leftist agenda. By all measures, Don Lemon in the morning is the exact same thing as Don Lemon in prime time. The good news for the rest of us is that Lemon will continue providing clips and soundbites of unadulterated delusions.

In one such clip, Demoted Don invited Caveman Fetterman onto his show. It’s hard enough to imagine there’s an audience out there that thinks to themselves, “Gee, I just woke up and I want to hear from Don Lemon is saying!” It’s even harder to imagine people ever wake up and think to themselves, “Gee, what insightful commentary can I glean from listening to John Fetterman stutter and stammer!”

But the same could be said about CNN in general, so here we are.

Lemon begins the atrocious interview, which is really just free marketing for Democrats, by asking the medically unsound Fetterman what his message is for Elon Musk now that he owns Twitter. Aside from having Fetterman trying to talk, what’s even the point of the question? The implication here is that Musk shouldn’t own Twitter or have the right to open it up to free speech, both of which are frightening observations.

In reality, Democrats, leftists, globalists, elites, and the like are terrified that real freedom and discussion will undermine their ability to control the narratives. It’s as simple as that.

Fetterman replies in the most Fetterman way possible:

No, I just am really just about just saying that, that I just want to make sure that we use your enormous, your enormous power to just make sure that, you know, we don’t have the kind of platform where we push those kinds of theories.

And I’m just grateful for the opportunity to just say that, you know, given that we have this opportunity, just using using the platform to really be about a force of good.

This is appalling. If Fetterman were a private citizen, we’d feel bad for him. His debilitation is a tragedy and one I wouldn’t wish on anyone. However, Fetterman is not just a private citizen. He is a candidate for the U.S. Senate and will be used a force for evil in the hands of manipulative handlers and DNC leadership. His stroke just makes their jobs that much easier.

Except for unserious trolls saying Tucker and Trump are dumber than Lemon and Fetterman don’t believe themselves. The rest of Twitter rightly honed in on what’s really going on:

On top of that, watch Fetterman’s eyes as he’s actually trying to read the answer to this planted question.

I cant even turn on CNN anymore without throwing up in my mouth a little.

The answer to the question, “who can we put Fetterman in a room with that’ll make him look smart?”

I see why Democrats leadership want him now. No way this guy ever makes a single decision. He will follow ever order he is given.

The fact that MSM is entertaining this should inform you journalism has lost all integrity.