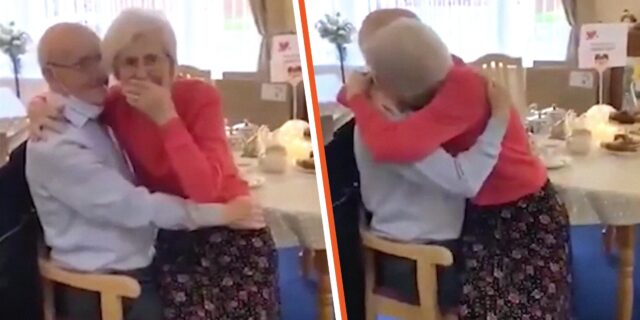 After living together for 67 years, an elderly married couple had to part ways because of some unforeseen circumstances. They thought they would never be able to see each other again, but fate had other plans in store for them.

This heartwarming story revolves around Harry Wilsden and his wife, Doreen, who tied the knot in 1953. Doreen was only 16 when she saw the then-young Harry and got to know him better.

The couple tied the knot a few years later. Doreen worked as a nurse in a school in Darlington, England, while Harry switched between multiple jobs. From working as a postman for the Royal Mail to serving as a fireman for steam engines, Harry enjoyed every moment of his professional life.

Like most couples, Doreen and Harry stuck together during tough times. They had two daughters, Christine and Ann, and decades later, they got to play with their granddaughter, Laura.

The couple raised their daughters to the best of their abilities and provided them with everything they needed. Harry often told them about his adventures at work, and his favorite one was when he was working as a fireman on a train that came to a halt in the snow.

Christine and Ann had always seen their parents live together and support each other. They were unaware that fate would put the couple in a position that would force them to stay apart.

They Saw the World Change

During their marriage of more than six decades, the couple saw many things happen worldwide. They lived in a time when there was no internet, and years later, they witnessed how smartphones and global connectivity changed everything.

They had no idea if fate would allow them to see each other again.

Like everyone else, the couple witnessed how the recent pandemic affected people’s lives in multiple ways. Working professionals experienced how it felt to work from home, and people had to suddenly cancel their family gatherings because of the dangers posed by the life-threatening virus.

After the global pandemic changed millions of people’s lives, a few still managed not to catch the virus. Unfortunately, Harry wasn’t one of them. He was 91 when he tested positive for COVID-19.

Before the diagnosis, the couple’s family had decided to send them to Grange Care Home in Darlington, England. Their family thought the couple was too old to care for each other.

Everything was going as per plan until the scary diagnosis came in. Catching the virus meant Harry had to isolate himself. He couldn’t stay with his wife or his family, which was something no one saw coming.

Instead of going to the care home together, Doreen went alone while her husband stayed in the hospital. At the time, people around the couple thought they would never meet again because of the numerous restrictions that came with the pandemic.

It was difficult for Doreen and Harry to live apart after spending so many years together. They had no idea if fate would allow them to see each other again.

Instead of losing hope or giving up, Harry stayed positive and was determined to see his wife again. Living alone in the hospital made him realize what Doreen meant to him. Their bond was decades old, but it was strong enough to help Harry recover from the life-threatening illness.

Once the doctors said Harry could reunite with his family, he headed straight to the Grange Care Home to surprise Doreen. The 87-year-old woman had no idea the love of her life would suddenly visit her that day.

The heartwarming moment of their sudden union was captured in a video where Doreen was shocked to see Harry after about two months. When she looked at his face, she couldn’t believe he was sitting right in front of her.

Harry tried to hold his tears back while his wife tried her best to recognize him. Once she hugged him, she knew it was Harry. She sat in his lap and asked:

While Doreen couldn’t believe fate allowed her to see Harry again, people around them were emotional watching them reunite. It was difficult for them, and even the viewers, to keep themselves from shedding a tear or two.

Doreen and Harry’s heartwarming story shows the power of true love. The need to meet his wife again helped Harry recover and reunite with her.

Click here to read about the love stories of eight couples who prove wedding vows are not just words. These stories will restore your faith in true love.