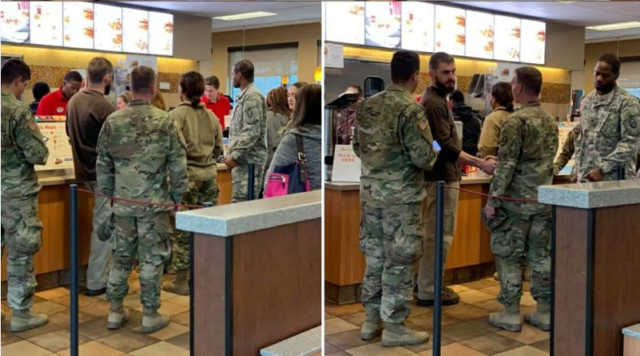 From an early age we’re taught to respect the flag and all who serve under it.

Front and center of that latter group of distinction stand our brave soldiers, who literally risk their lives in the defence of liberty and freedom.

Sadly, there are too many who forget about our troops; too many who go through their lives without giving them the due respect they deserve.

Fortunately, there are also those who consider them each and every day. Two brothers from Durham, North Carolina, were having a meal at Chick-fil-A when two serving men walked through the door. 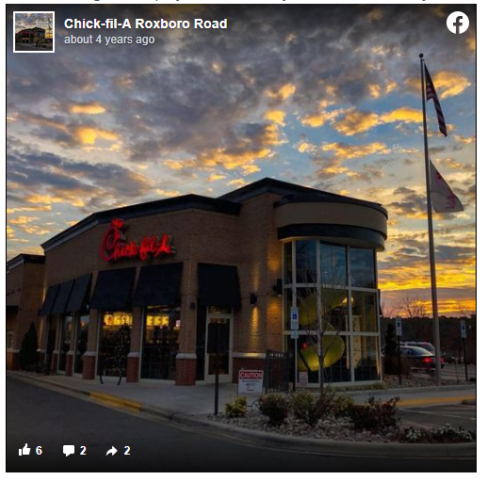 Jonathan and Stephen Full had taken their kids to Chick-fil-A when they saw two military members enter the restaurant. No sooner had they got through the door than did Jonathan stand up.

He told WTVD: “It’s always been on my mind to pay for some military members’ meals when I get the chance.” 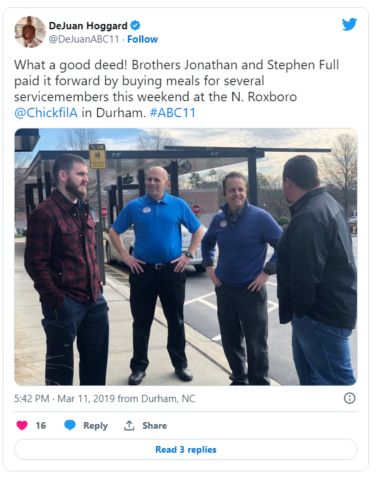 With that on his mind, Jonathan went through with a promise he made to himself in the past.

“It just hit me real good in my heart to do it then. And it just happened,” he explained.

The invasion
Of course, Jonathan had little idea of who was about to walk through the doors. No less than nine more serving men and woman, all in uniform, entered the Chick-fil-A.

“Man is there a bus dropped off somewhere? Did we just hit the motherload here?” Jonathan asked himself.

“What I felt moving through my heart is I didn’t care if 200 more showed. I was still going to buy the meal.”

Stephen later posted on Facebook to express how incredibly proud he was of his little brother. Not only that, but he took some photos, too.

“He didn’t even bat an eye,” Stephen shared.

Twist in the tale
It would later transpire that there was more behind the act than meets the eye. Jonathan and Stephen’s step-brother Joshua had suffered from severe PTSD following a tour in Iraq, and had taken his own life just one week before that day at Chick-fil-A.

Stephen wrote on Facebook: “(Jonathan) asked (the military members) to reach out to anyone they knew with PTSD and try their best to get them the help they needed.” 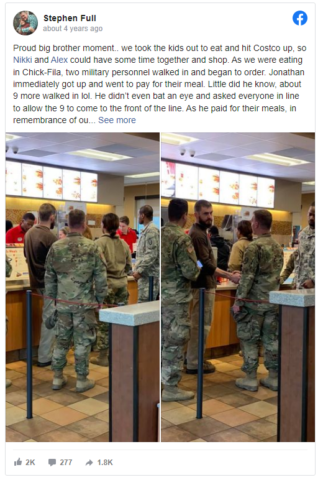 What an awesome act of kindness by Jonathan, his brother Stephen has every right to be proud. What’s more, what an incredible example he’s setting for the rest of society to follow. Soldiers sacrifice so much to keep our country safe, and all too often are they swept under the rug and passed over in favor of others.

Jonathan, you’re a credit to your family and a true hero!

Share this article if you, too, support our troops!