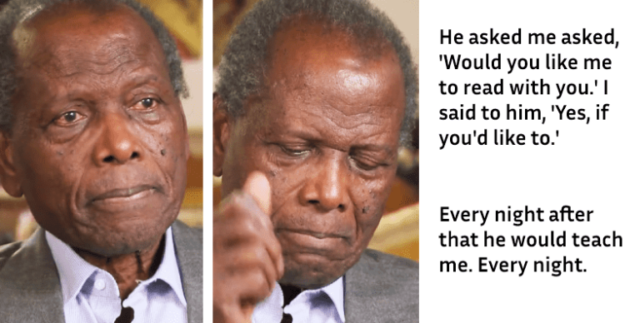 Poitier said one of his great regrets was that he never got to thank the waiter for his help. “It was too late,” he recalled.

The world lost one of its great actors when Sidney Poitier passed away last week at the age of 94. Poitier was Hollywood’s first Black movie star and also the first Black man to win the best actor Oscar. The actor, director, and civil rights icon hailed from the Bahamas and came to New York with dreams of making it as an actor but he was held back by the fact that he couldn’t read. As an actor, there was no way he could make it without being able to read it. Poitier said that it was a kind waiter who took time out of his schedule to teach him to read. Poitier got emotional as he recalled the incident on CBS Sunday Morning to Lesley Stahl.

WATCH: Sidney Poitier, who passed away this weekend at age 94, chokes up as he tells Lesley Stahl about the elderly Jewish waiter who taught him to read, enabling his acting career to take off pic.twitter.com/MPkDynlFYU

— Avi Mayer (@AviMayer) January 9, 2022
Poitier was washing dishes at a restaurant to get by after arriving in New York. He would bring newspapers to his shifts and a Jewish asked him about the news and the Poitier replied he couldn’t tell him as he couldn’t read. “I sit there, and I’m reading one of the papers. And there was a Jewish waiter sitting at the table, an elderly man, and he saw me there,” recalled Poitier in the episode. “He got up, and he walked over, and he stood by the table that’s next to the kitchen, and he said, ‘Hi. What’s new in the papers?’ And I said to him, ‘I can’t tell you what’s new in the papers because I don’t read very well. I didn’t have very much of an education.’”

“He asked, ‘Would you like me to read with you.’ I said to him, ‘Yes, if you’d like to,’” he said. Poitier explained that he sat “every night” with him to teach him after his work shift was over. Poitier fought tears as he recollected the kindness of a man who had almost nothing to gain from teaching Poitier, and he still did it. “Every night after that he would come over and sit with me, and he would teach me what a comma is and why it exists, what periods are, what colons are, what dashes are,” said Poitier. “He would teach me that there are syllables and how to differentiate them in a single word and consequently, learn how to pronounce them. Every night,” said the actor getting emotional.

denzel washington on being called the next sidney poitier.

— maya cade (@mayascade) January 8, 2022
Poitier added that it slowly and surely changed the trajectory of his life, as a human being and as an actor. He still had one regret though. “One of my great regrets in life is that I went on to be a very successful actor, and one day I tried to find him, but it was too late, and I regret that I never had the opportunity to really thank him,” said Poitier on an episode of the podcast “What It Takes.” The actor has also paid tribute to the kind Jewish waiter in interviews with Oprah, on “60 Minutes” and also mentioned him in award acceptance speeches.

“You ask me one-dimensional questions about…the Negro-ness of my life. I am artist, man, American, contemporary. I am an awful lot of things, so I wish you would pay me the respect due.” #SidneyPoitier (1927 – 1/6/22 R.I.P.) on the press’s reductive focus on his “blackness.”

— Free Black Thought (@FreeBlckThought) January 7, 2022
Poitier would go on to become one of the biggest stars in Hollywood and certainly the first Black movie star. Up until then, Black people only starred in bit-part roles that were cut of movies when released in conservative areas of America. As Denzel Washington perfectly put it: “You couldn’t cut Sidney Poitier out of a Sidney Poitier picture. He was the reason a movie got made. the first solo, above the title, African-American movie star. He was unique.” Poitier won an Oscar for his performance in ‘Lilies of the Field,’ in which he played an itinerant laborer who helps a group of White nuns build a chapel.

You opened the door for us all. We will forever speak your name, #SidneyPoitier!

— Debbie Allen (@msdebbieallen) January 7, 2022
Poitier’s touched upon his journey and the significance of it after being awarded an honorary Oscar for his contribution to film, in 2002. “I arrived in Hollywood at the age of 22 in a time different than today’s, a time in which the odds against my standing here tonight 53 years later would not have fallen in my favor. Back then, no route had been established for where I was hoping to go, no pathway left in evidence for me to trace, no custom for me to follow,” he said, reported The Guardian. “Yet, here I am this evening at the end of a journey that in 1949 would have been considered almost impossible and in fact might never have been set in motion was there not an untold number of courageous, unselfish choices made by a handful of visionary American film-makers, directors, writers, and producers,” he said before naming many of them who supported his journey.

When thinking about Sidney Poitier, my mind goes to In the Heat of the Night. He once said that he joined the film on the condition that Tibbs could slap Endicott back. The scene represented the tensions of the time, and it was huge for the culture.