Skip to content
Home Stories ‘Don’t Be a Vassal of the CCP’: DeSantis Sides with Elon Musk, Takes Apple to the Wood Chipper Over Censorship 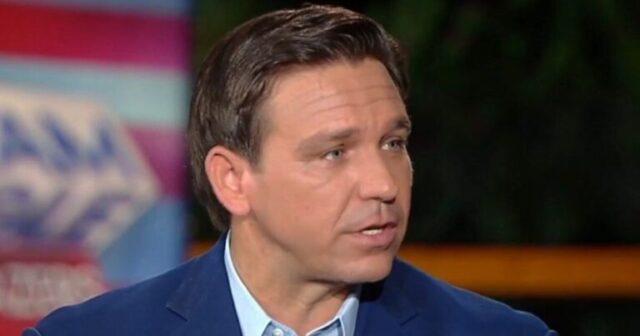 Florida Gov. Ron DeSantis on Tuesday sided with Twitter CEO Elon Musk in taking some needed shots at Apple over its failure to support free speech.

“There [are] reports that Apple is not allowing the protesters to use this AirDrop function where they’re trying to communicate. That obviously is providing aid and comfort to the [Chinese Communist Party],” DeSantis said at an event in Jacksonville, Florida.

Apple changed the AirDrop file-sharing function for the iPhone in mainland China as widespread protests over the communist government’s “zero COVlD” strategy spread. Protesters were using the function to share files — including leaflets and slogans — between phones without having to rely on the internet, which the government controls.

DeSantis continued, “You also hear reports that Apple is threatening to remove Twitter from the App Store because Elon Musk is actually opening it up for free speech and is restoring a lot of accounts that were unfairly and illegitimately suspended for putting out accurate information about COVlD.”

The governor stated that the old, pre-Musk regime sought to “suffocate” dissent on Twitter, particularly regarding COVID-related information.

DeSantis argued if Apple responds to Musk allowing more speech on Twitter by pulling the platform from the App Store, “that would be a huge, huge mistake.”

“It would be a really raw exercise of monopolistic power that I think would merit a response from the United States Congress,” the Republican said.

“Don’t be a vassal of the CCP on one hand and then use your corporate power in the United States on the other to suffocate Americans and try to suppress their right to express themselves,” DeSantis said.

Musk tweeted Monday, “Apple has also threatened to withhold Twitter from its App Store, but won’t tell us why.”

A user responded with a graphic showing that over 97 percent of Apple employee political donations went to Democratic Party candidates during the 2022 election cycle.

Musk replied, “Wow, they don’t sound biased at all!”

97.5% of Apple’s donations are to the Democratic Party. Twitter allowing free speech is against party interests so Apple must play the role of enforcer. pic.twitter.com/khv7VPNawt

According to Open Secrets, the Apple corporation gave over $1.2 million to the Democratic Party and its candidates and about $98,000 to the GOP.

Apple has mostly stopped advertising on Twitter. Do they hate free speech in America?

Of course, the most high-profile reinstatement was former President Donald Trump.

I’m fine with Trump not tweeting. The important thing is that Twitter correct a grave mistake in banning his account, despite no violation of the law or terms of service.

Deplatforming a sitting President undermined public trust in Twitter for half of America.

“Deplatforming a sitting President undermined public trust in Twitter for half of America,” he added.

Musk further noted that he was “a significant supporter of the Obama-Biden presidency and (reluctantly) voted for Biden over Trump.”

Musk said he would support DeSantis if he runs for president in 2024.

“My preference for the 2024 presidency is someone sensible and centrist. I had hoped that would the case for the Biden administration, but have been disappointed so far,” he tweeted.

But freedom of speech is the bedrock of a strong democracy and must take precedence.

My preference for the 2024 presidency is someone sensible and centrist. I had hoped that would the case for the Biden administration, but have been disappointed so far.

Asked directly if he would back DeSantis, Musk responded, “Yes.”

Musk and DeSantis clearly both love freedom, and there’s nothing more American than that.