Skip to content
Home Stories Can You Guess The Puzzle That Has People All Over The Internet Buzzing? 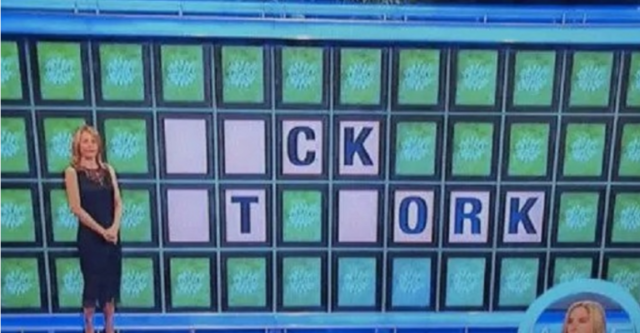 The solution to a “Wheel of Fortune” riddle had the whole country perplexed at the same time.

The game went viral after a podcast host posted a photo of the puzzle to Twitter, where it received more than 40,000 likes and 13,000 retweets.

This viral video about a guy who gets stuck in an elevator and comes out with a homemade solution has gone viral. More than 7,000 people responded to the poll, which included such phrases as “Suck it dork,” “Duck at work,” “Lick it fork,” “Pick at pork,” and even the nonsensical, “Return to Zork.”

Meanwhile, as people wrote their opinions on Twitter, the tweet gained even more attention; and not just from those who disliked it.

“I really appreciate all the replies and quote tweets of this with alternate jokes,” posted the podcast host. “Can’t get enough of it!”

“[H]ahahahahaha why can’t I be watching when this sh** happens!?” said one Twitter user.

“[I] hate that show but this is funny,” another tweeted.

It turns out that the right response, which the sharp “Wheel Of Fortune” contestant guessed within one minute, was “back at work.”

his isn’t the first time this year that “Wheel of Fortune” has caused a stir on the internet.

In March, one participant, known as Kevin, mistook “A Streetcar Named Desire” for “A Streetcar Naked Desire,” amusing even the show’s host, TIME Magazine notes.

“And although you got the right answer,” host Pat Sajak said to the winner, “I’d rather see Kevin’s play.”

Users flocked to Twitter to voice their opinions about the incident.

“Dude on Wheel of Fortune had to solve this: A STREETCAR NA_ED DESIRE,” tweeted one person. “He asked for a K. I’m gonna go lie down.”

“Nothing’s funnier to me than Wheel of Fortune fails,” said another. “Unlike Jeopardy it’s literally spelled out for you.”

“Hey, Wheel of Fortune contestant who just tried to fill in A STREETCAR NA_ED DESIRE with a K, DM me – I’ll buy you a beer or 20,” said a third person.

A few weeks later, a “Wheel of Fortune” contestant became nationally known for yet another entertaining riddle and response.

In April, the category “living things” was revealed to be “_O_EYS_CK_E B_S.”

The woman’s guess, “popsicle bike,” when the correct answer was “honeysuckle bush,” amused many.

“I don’t know what I was saying,” the contestant later said. “Maybe it’s because I saw a ‘K’ at the bottom, but I’m like OK, let’s move on. So I didn’t think about it, but my daughter’s like, ‘That’s gonna go all over.’”