Skip to content
Home Stories Betty Reid Soskin, oldest park ranger in the US, retires at 100 years old – thank you 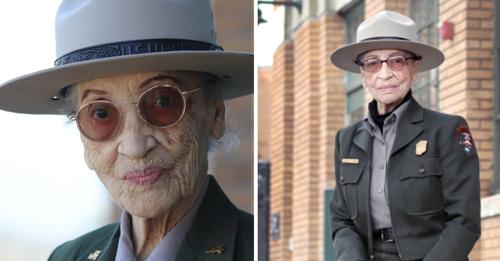 Betty Reid Soskin, the oldest active National Park Service ranger, has retired from duty after more than 15 years of sharing her life stories – including those from World War II – at Rosie the Riveter/Home Front National Historic Park in Richmond.

Soskin made headlines back in September after turning 100 years old, making her comfortably the oldest park ranger in service. A public celebration to mark her retirement from duty has been set for April 16.

As per reports, the centenarian’s work as a park ranger has helped the park service to evolve the way it conveys history to visitors.

In a statement confirming her retirement, Soskin said: “To be a part of helping to mark the place where that dramatic trajectory of my own life, combined with others of my generation, will influence the future by the footprints we’ve left behind has been incredible.”

Way back in World War II, the 100-year-old – then a young woman – worked as a file clerk in a segregated Union hall. Her and husband Mel Reid would later go on to found a record store called Reid’s Records. The store officially closed in 2019.

In 2011, Soskin, at the age of 89, became a permanent employee for the National Park Service. In her role, she led public programs and shared memories and thoughts at the park visitor center.

“Being a primary source in the sharing of that history – my history – and giving shape to a new national park has been exciting and fulfilling,” Soskin said.

“It has proven to bring meaning to my final years.”

“Her efforts remind us that we must seek out and give space for all perspectives so that we can tell a more full and inclusive history of our nation.”