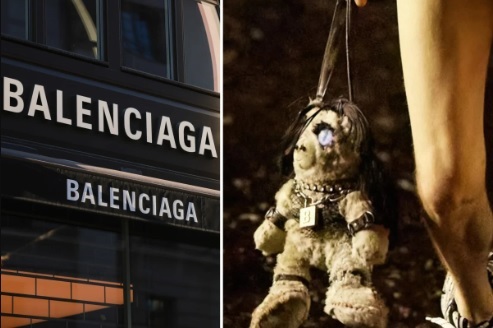 The images went viral on social media, provoking public outrage over other disturbing elements in the photographic ad series, including court documents in one photo that reference child abuse and pornography.

“The ads blatantly exploit the innocence of children to glamorize perversity and sell merchandise,” Mary Rice Hasson, director of the Person and Identity Project for the Ethics and Public Policy Center, told CNA.

Balenciaga has since removed all traces of the ad campaign and deleted or hidden all of its Instagram posts.

Kim Kardashian, a frequent partner with the Spanish-based designer and wearer of its products, said Sunday she was “re-evaluating” her relationship with the brand.

Where are all the big mouths on this platform…

If you are a Hollywood celebrity or a Lib activist & haven’t denounced #Balenciaga #Balenciagapedos #BalenciagaGroomers yet then I’ll assume you approve of the #grooming and sexual exploitation of children. #RedShoeClub #Groomers pic.twitter.com/p2P3RQzhB8

“As a mother of four, I have been shaken by the disturbing images,” Kardashian tweeted. “The safety of children must be held with the highest regard and any attempts to normalize child abuse of any kind should have no place in our society — period.”

Kardashian said she would base her assessment on the company’s “willingness to accept accountability for something that should have never happened to begin with” and “the actions I am expecting to see them take to protect children.”

The company issued an apology on Instagram shortly after Kardashian’s reproof, stating it “strongly condemn[ed] child abuse” and that the “BDSM-inspired outfits” “should not have been featured in a photoshoot with children.”

“It was never our intent to include it in our narrative,” the post read. “We could have done things differently.”

The post blamed third-party entities for providing court documents of a real Supreme Court ruling on child pornography for the photoshoot.