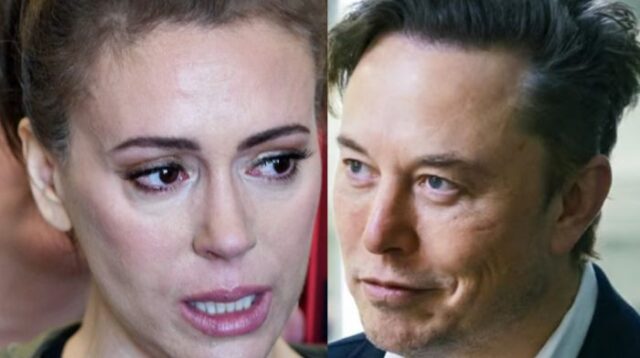 The “woke” Hollywood star Alyssa Milano just got destroyed by Elon Musk on Twitter after she proudly announced that she traded in her Tesla for a Volkswagen.

I gave back my Tesla.

I bought the VW ev.

I’m not sure how advertisers can buy space on Twitter. Publicly traded company’s products being pushed in alignment with hate and white supremacy doesn’t seem to be a winning business model.

‘I Gave Back My Tesla’

Milano ditched Tesla in protest of Musk taking over Twitter, but this move ended up backfiring on her in a big way.

“I gave back my Tesla,” Milano tweeted. “I bought the VW ev. I love it. I’m not sure how advertisers can buy space on Twitter. Publicly traded company’s products being pushed in alignment with hate and white supremacy doesn’t seem to be a winning business model.”

Unfortunately for Milano, this blew up her face when the conservative comedians known as the Hodge Twins responded by saying, “Volkswagen was literally founded by the Nazi’s and Hitler.”

Musk himself then replied to this with a laughing emoji along with“100” emojis.

Volkswagen was literally founded by the Nazi’s and Hitler. 🤡

Milano later returned to Twitter to say “Must be a very slow news day” in response to a user who wrote, “Can somebody tell the idiots dunking on @Alyssa_Milano that Germany is our ally now? I feel like it’s been like that for a minute?”

Can somebody tell the idiots dunking on @Alyssa_Milano that Germany is our ally now? I feel like it’s been like that for a minute? https://t.co/0Ew8E4WECB

Unfortunately for Milano, however, Twitter users still had a field day at her expense:

Newsweek reported that Musk bought Twitter last month for $44 billion, and he has since reinstated the former President Donald Trump to the platform after he was suspended following the Capitol riot in January of 2021. Musk reinstated Trump after posting a poll to Twitter asking users if the former president should be allowed back on the social media platform.

“The people have spoken,” Musk said after the poll ended. “Trump will be reinstated. Vox Populi, Vox Dei.”

Milano arguably has Trump derangement syndrome worse than anyone else in Hollywood, and she regularly spoke out against him during his presidency.

“Donald Trump has failed the American people,” she wrote on Facebook before the 2020 presidential election. “Don’t let someone else decide if he gets to do it again. Make your voice HEARD this cycle – make a plan and VOTE!”

This is the mask that Alyssa Milano wears while driving by herself in her Nazi car pic.twitter.com/rFMNgLZzZJ

Last year, Milano said that she is considering running for the House of Representatives in 2024.

“I’m looking at California’s 4th District to potentially run against [Rep. Tom] McClintock (R),” Milano said, according to The Hill. “I split my time between Truckee, Calif., and Bell Canyon, Calif., and the Republicans have basically had a strong arm there in the 4th District. I would love to maybe consider flipping that seat blue.

“It’s going to take someone with, I think, name recognition and deep pockets to be able to run against McClintock, and so I’m considering it,” she added. “I’m basically gathering information right now, speaking to different consultants, speaking to the community.”

Milano got her start in Hollywood as a child star on the sitcom “Who’s The Boss?,” and she later found fame on the television show “Charmed” as an adult. Sadly, in recent years she’s become more famous for being a “woke” liberal activist than she has for anything she’s done in the acting world.

We’re glad to see that Milano’s latest “woke” stunt has blown up in her face thanks to Musk!