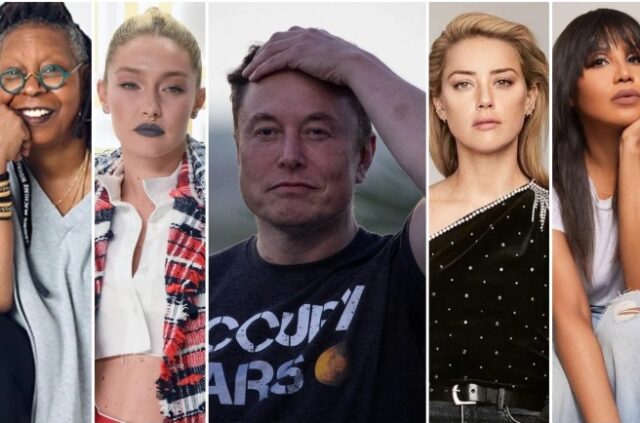 Elon Musk’s acquisition of Twitter has already prompted many celebrities to leave the social media platform.

Last week, the 51-year-old richest man in the world showed up at Twitter’s San Francisco headquarters carrying a kitchen sink as he closed in on his $44 billion purchase of the social network.

The Tesla founder wrote “entering Twitter HQ – let that sink in!” along with a video of him walking in the hallway of the Twitter building.

As soon as the news was confirmed – after it was rumored for months that Musk would own the platform – many Hollywood stars and notable figures revealed that they will deactivate their Twitter accounts.

The TV show creator Shonda Rhimes and industry stars revealed that they plan to quit the platform now that it is owned by the SpaceX founder – who has pledged to make vast changes such as potentially changing the ban on former President Donald Trump.

“Not hanging around for whatever Elon has planned. Bye,” Rhimes tweeted to her Twitter followers on Saturday (October 29), two days after Musk closed in on his deal.

Grammy-winning singer Sara Bareilles chimed in and said: “Welp. It’s been fun Twitter. I’m out. See you on other platforms, peeps. Sorry, this one’s just not for me.”

Not hanging around for whatever Elon has planned. Bye.

In a tweet to her nearly 2 million followers, Toni Braxton criticized the tweets she saw on Twitter since the Business mogul’s takeover, writing: “I’m shocked and appalled at some of the ‘free speech’ I’ve seen on this platform since its acquisition.”

“Hate speech under the veil of ‘free speech’ is unacceptable; therefore I am choosing to stay off Twitter as it is no longer a safe space for myself, my sons, and other POC,” the Grammy-winning RnB star added.

Welp. It’s been fun Twitter. I’m out. See you on other platforms, peeps. Sorry, this one’s just not for me. ❤️🙏🏼

Ken Olin, an executive producer of the NBC show This Is Us, tweeted to his 290,000 followers that he is “out of here” and made a plea for kindness and peace.

Mick Foley, a retired professional wrestler and actor, said in a post on his Facebook page that he is taking a “break” from Twitter “since the new ownership – and the misinformation and hate it seems to be encouraging – has my stomach in a knot”.”I really do enjoy connecting with all of you on social media, but it can get overwhelming sometimes. I think I’ll be back on in a few weeks, but in the meantime, I will continue to post on Facebook and Instagram,” Foley wrote.

I’m shocked and appalled at some of the “free speech” I’ve seen on this platform since its acquisition. Hate speech under the veil of “free speech” is unacceptable; therefore I am choosing to stay off Twitter as it is no longer a safe space for myself, my sons and other POC.

“I hope all of you will be kind to one another,” he said, adding, “Please vote if you can too – our democracy seems to be hanging on by a thread.”

According to a report by the Washington Post, the Network Contagion Research Institute (NCRI) – a group that examines messages across social media – stated that the use of the “n-word” on the app increased by nearly 500% over the 12 hours after the finalization of the billionaire’s deal.

NBA star LeBron James also took to Twitter to ask the new CEO to take action against pages using racial slurs such as the n-word, writing: “I don’t know Elon Musk and, tbh, I could care less who owns Twitter.”

“But I will say that if this is true, I hope he and his people take this very seriously because this is scary AF. So many damn unfit people saying hate speech is free speech,” he added.

Musk had previously outlined in his official statement announcing the historic acquisition, that “free speech is the bedrock of a functioning democracy, and Twitter is the digital town square where matters vital to the future of humanity are debated.”

However, he clarified his comments on “free speech” earlier this year, saying that if a user tweeted something “illegal or otherwise destructive to the world” then a temporary suspension would suffice rather than permanently removing users. He also added that the post should be made invisible.