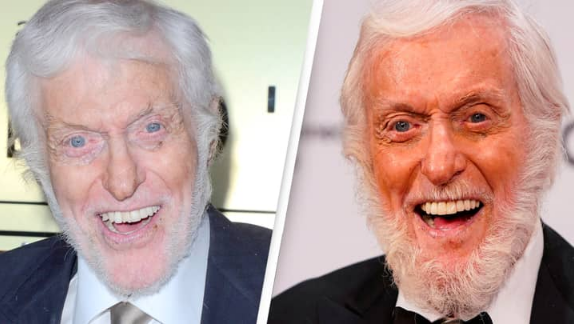 Actor Dick Van Dyke, age 96, was recently spotted in Malibu leaving a restaurant, and he shared that he was “just glad to still be here.”

While Dick Van Dyke was out to lunch with friends and running errands, he was seen by the paparazzi looking happier than ever. And the people behind the camera wished him a Happy Father’s Day before he went on his way.

The Chitty Chitty Bang Bang actor is known for staying fit and healthy despite his old age. He even shared that he still goes to the gym to work out three times a week! Now that’s more than some people half his age!

Actor Dick Van Dyke, Age 96, Is ‘Just Glad To Be Here’
“I’ve always been an exerciser and still am,” said Dick Van Dyke. “I get in the pool and exercise. At my age, they say to keep moving. Put me on solid ground and I’ll start tapping.” It seems like there is nothing that can stop this talented actor & dancer!

Dick Van Dyke also shared that he likes to do water aerobics, lift weights, and walk on a treadmill while he is at the gym. But he said that his health can also be attributed to “good genes.”

No matter what genes he inherited, it is great to see Dick Van Dyke at age 96 still taking care of himself. Many of us grew up watching him in beloved movies like Mary Poppins. So it is wonderful to see that he is still around and enjoying his life.

Dick Van Dyke was born on December 13, 1925 in West Plains, Missouri. He grew up in Danville, Illinois.

At one point in his life, he wanted to be a minister. Van Dyke was reportedly influenced by his mother’s family’s involvement in religion. But after taking a drama class in high school, he realized he was called to another career.

However, becoming a professional entertainer would be put on hold because, in 1944, Van Dyke left high school 1944 to join the United States Air Force.

But it seemed like even the Air Force knew he was destined to be an entertainer. Van Dyke was denied from being able to enlist in the military several times before he was given a job as a radio announcer.

He eventually transferred to the Special Services where it was his job to entertain the troops in the United States.

The 96-year-old began his career on the radio in the late 1940s, but it wasn’t very successful. Unless you count meeting his first wife, Margie Willet.

The two hosted a radio program, reportedly because it helped them pay for their 1948 wedding and awarded them a free honeymoon.

He soon took his talent to the stage after convincing a pantomime performer to join him and form a comedy duo. The two, Van Dyke and Phil Erickson, toured nightclubs on the west coast, and in the early 1950s, they performed for a local television station in Atlanta, Georiga.

In November 1959 he appeared on another stage, Broadway. He made his Broadway debut in The Girls Against the Boys, and then went on to play the lead in Bye Bye Birdie, which won him a Tony Award.

It was then that’s Van Dyke finally started to see some success.

He starred in The Dick Van Dyke Show from 1961 to 1966, where he and the show won multiple Emmy Awards.

But all the while Van Dyke was filming his television series, he was also working on perfecting his craft in another area of entertainment: film.

He played Albert J. Peterson in the film adaptation of Bye Bye Birdie (1963) and Bert and Mr. Dawes Senior in Mary Poppins (1964). He starred in many other movies, all which saw very little success at the box office.