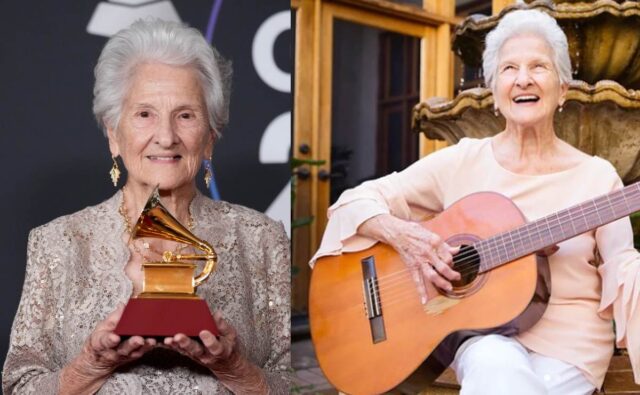 Making a lifelong dream a reality is one of life’s most satisfying experiences. But, every now and then, life throws us a curveball, forcing us to abandon our grand plans. Fortunately, there are people whose example reminds us that it is never too late to begin working hard to realize our full potential and share our talent with the rest of the world.

Angela Alvarez, 95, is a music enthusiast, singer, and songwriter who has been composing and playing music for decades but has never had the opportunity to share it with the rest of the world – until now.

She ultimately published her debut album earlier this year, with the help of her grandson, earning her a nomination for the renowned music prize.

After years of putting her goal on hold, Alvarez made history by receiving the Latin Grammy Award for a best new artist on November 17 in Las Vegas. She shares the award with 25-year-old Mexican singer Silvana Estrada and is the category’s oldest winner.

Álvarez was born in Cuba and has loved music since she was a youngster: “When I was a child, I had two aunts who played the piano and taught me how to sing.” Whenever there was a family event, I was the artist — they prepared clothes for me, and I loved to perform,” she remembers.

Despite her desire to become a singer, her father discouraged her from pursuing a musical career. Angela, on the other hand, married and had four children. She did, however, continue to write songs and perform for her family and friends.
Even after immigrating to the United States, her route to success in the music industry was fraught with difficulties. Angela’s songs finally saw the light of day owing to her grandson Carlos José Álvarez, who believed in her potential and organized the CD recording.