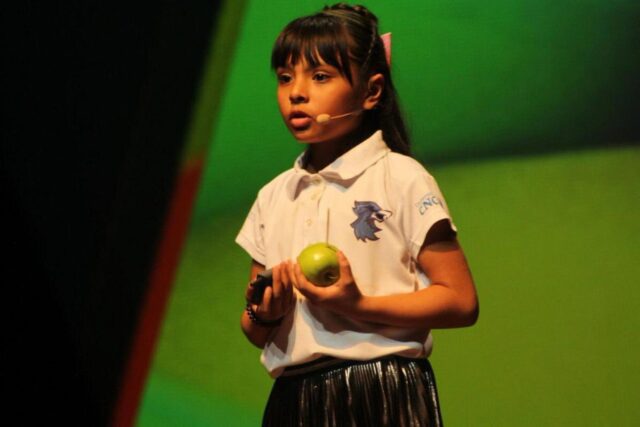 Eight-year-old Mexican girl Adhara Pérez was called “weird” in school. She stood out. The reason being that Adhara is a child genius. Her bullies would have loved the fact that Adhara at eight is earning two online degrees in the engineering field.

More often than not, it is the gifted who suffer in society. They think differently and see the world through a wider, deeper perspective. Intellectuals, artists, and even musicians can suffer from alienation.

And this is something young Adhara Pérez knows.
Pérez allegedly possesses an IQ of 162. To put that in to perspective, her number is a bit higher than famous geniuses Albert Einstein and Stephen Hawking. Both those men had an estimated intelligence quotient of 160.

According to the young lady, she was “made a mockery at school.” Classmates and bullies called her names like “weirdo” and “oddball.” Even the teachers in her school thought Adhara wouldn’t have a future.

“I saw that Adhara was playing in a little house and they locked her up. And they started to chant: ‘Oddball, weirdo!’” her mother, Nallely Sanchez, shared. “And then they started hitting the little house. So I said, I don’t want her to suffer.”

Her horrible experiences in school caused the young Adhara to fall into a “very deep” depression. She no longer wanted to go to school, and teachers would report that she’d just sleep and show no interest.

Nallely knew that her daughter was different in that she possessed an intelligence most kids didn’t have. Adhara had a mastery over algebraic knowledge and the periodic table. So Nallely took her daughter to therapy.

Nallely then took Adhara to the Talent Care Center as suggested by the psychiatrist.

Adhara was confirmed a genius by the center. It was there that she was able to thrive in a learning environment with students who also possessed amazing intelligence.
Adhara finished elementary at the age of 5, middle school by 6, and high school by 8. Adhara is currently in the process of earning two online degrees. She’s taking up industrial engineering in mathematics and another in systems engineering.

Adhara was featured in Forbes México‘s 100 Most Powerful Women in Mexico. She then wrote a book about her experiences as a “genius girl”. A girl who became a victim of bullying.

The title of the book roughly translates to Do Not Give Up.

Pérez is also developing a smart bracelet that monitors the emotions of “unique” children.
Nallely has plans of taking Adhara to the United States where her daughter can take the entrance examination at University of Arizona. That’s Adhana’s dream school. And we know she’ll get there.

The genius young lady is working on her English before making her way to the US where she plans to explore astrophysics. The reason being that Adhana dreams to be an astronaut.