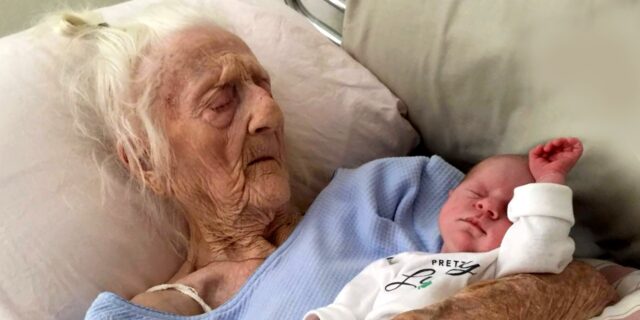 A 101-year-old woman had the privilege of meeting her newborn great-granddaughter. The duo shared a special moment that would live on for many years.

Rosa Camfield was born in a different era and lived through many experiences. Her life was busy and vibrant, and she had a treasure chest filled with memories.

Camfield was described as a wise woman who was always happy. In her 40s, she became a teacher, and the Michigan woman undoubtedly enjoyed telling stories. Born on June 13, 1913, Camfield was blessed and spent many decades with her loved ones.

In 2015, a photo of the older woman went viral unexpectedly. Camfield’s granddaughter, Sarah Hamm, shared a picture of her grandmother and her two-week-old baby—there was a 101-year difference between them!

Baby Kaylee slept peacefully in her great-grandmother’s arms and the moment meant the world to Camfield. She had lived through the Depression and faced many ups and downs in life, but bonding with her family was a highlight.

In her final days, Camfield unknowingly inspired an internet frenzy. Aside from the interest in her photo with baby Kaylee, many users chose to share their own multi-generational photo memories.

She Would Have Loved It

Sadly, Camfield didn’t have the chance to spend years with the newest family member and passed away shortly after the photo was taken, making it a bittersweet memory.

Hamm never expected the photo to garner millions of likes and shares, but it did. Netizens were drawn to it, and it evoked an emotional response from many people. Hamm explained how her grandmother likely would have responded to the attention:

Shocked by the Overwhelming Response

Camfield, who had found love again at 80 with her childhood sweetheart, would be missed by everyone who knew her. But they were immensely grateful for the many years they shared with her.

In her final days, Camfield unknowingly inspired an internet frenzy. Aside from the interest in her photo with baby Kaylee, many users chose to share their own multi-generational photo memories.

Countless people shared images featuring up to five generations in one photo. The experience meant the world to Hamm and her family because it kept their grandmother’s memory alive. Hamm added:

“We were in complete shock that the picture took off like it did. Within an hour, it was clear that I had underestimated the impact it would have … as it was shared and liked hundreds of times per minute.”

A Memory That Will Last a Lifetime

Lynn Vine, Camfield’s youngest daughter, revealed that her mother was a fighter, never letting anything get her down. She said that her mom’s opinion was simple:

“Put a smile on your face, and things will be better the next day.”

While Camfield is no longer around, Hamm is happy she captured an unforgettable moment between her daughter and grandmother, something both she and Kaylee would cherish forever.

Meanwhile, Hamm was thrilled with the response to her photo, noting: “I think it’s sweet. The stories people will be able to tell their grandchildren and great-grandchildren [are] amazing.”

The heartwarming photo touched the online community. It symbolized the coming together of endings and new beginnings—many users offered their condolences while others wished the family well:

“Her soul kept her alive so she could meet this angel. Then she must have been complete. May she rest in peace!”

“How precious! The family will cherish this picture forever.”

“What a living ending and beginning for both.”

“Such a treasure! God bless her and her family.”

While Camfield didn’t have much time with her beloved great-granddaughter, one moment was enough. She is looking over little Kaylee now.

Click here for a story that will melt your heart. A 92-year-old grandmother was lucky enough to see her granddaughter get married, and she had a special role at the wedding!