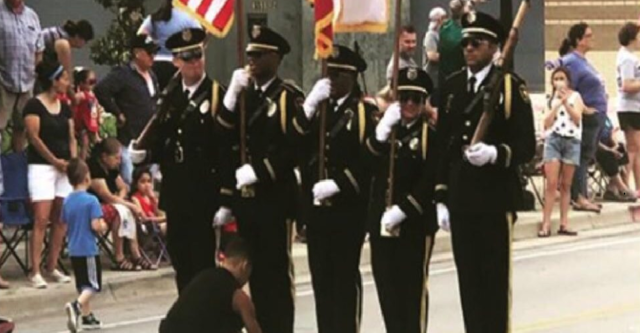 During a 4th of July parade in Arlington, Virginia, one honor guard had an issue when his shoelace came untied during the parade. But thanks to the help of one quick-thinking 10-year-old boy named Josh—who ran out and tied the guard’s shoelace for him—the minor issue didn’t become a major one. Arlington Police Chief Will Johnson tweeted out giving many thanks to the youngster.

A loose shoelace is annoying at the best of times, but for an honor guard to get one during a 4th of July parade could mean disaster. Something so small unraveling can quickly add up and amount to a much larger problem. At least, the person whose shoelace untied could trip, and at worst, it could trigger a succession of falls that could hurt a large number of people. Unfortunately, at one 4th of July parade in Arlington, Virginia, one honor guard’s shoelace became untied during the parade. 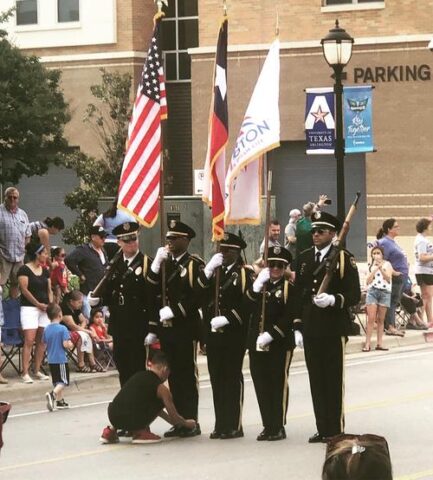 But thanks to a fast-thinking local boy named Josh, a potential disaster was curbed. After noticing the loose shoelace on the honor guard’s shoe—who happened to be the one carrying the US flag and was standing among four other guards—Josh immediately ran up to the guard from the sidelines of the parade.

He leaped into action immediately and kneeled down, and began to tie the guard’s shoelace. The guard and his fellow men were obviously intrigued and thankful at the boy’s initiative, smiling down at the youngster as he helped him out of this pickle.

Onlookers were just as surprised but delighted at the boy’s actions, as they smiled from the sidelines. Once he finished tying the honor guard’s shoelace, young Josh ran back to the sideline and continued to watch the parade along with everybody else.

Posting to Twitter, Arlington Police Chief Will Johnson thanked Josh and offered him a chief challenge coin. He wrote: “At the start of the 4th of July Parade this young man ran out to help one of our Honor Guard members whose shoe came untied. Thank you Josh! We should all be so kind. I have a Chief Challenge coin for you. #America” 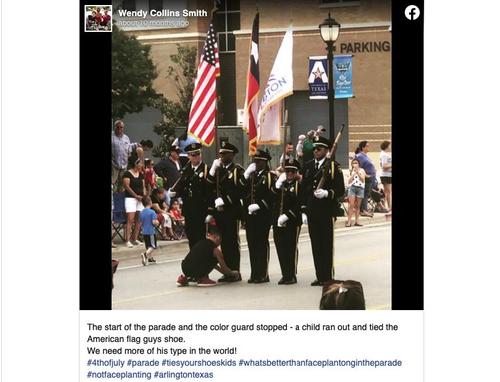 The Arlington Police Department also posted about the incident and gave their thanks. They wrote that “Josh is the grandson of Dr. Dennis Wiles, pastor of First Baptist Arlington.”

Josh’s selfless act was a pleasure to witness, especially at an event on the 4th of July, in which Josh helped an honor guard who was honoring the nation. It’s something we could all keep in mind.

One onlooker named Wendy Collins Smith posted about the incident to Facebook, writing: “We need more of his type in the world!” She’s right about that.

What did you think of Josh’s selfless act in helping the honor guard? Let us know in the comments and be sure to pass this on to any family and friends.